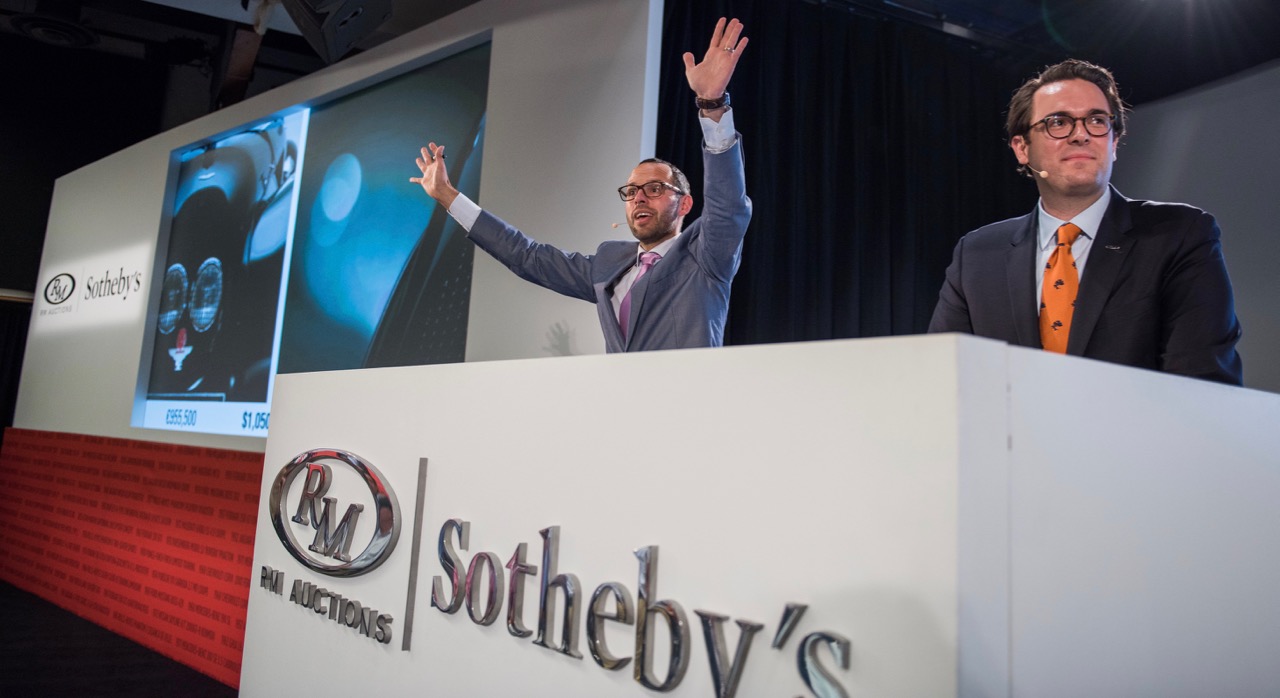 It’s not as if RM Auctions was struggling on its own. But the blockbuster news back in mid-February was that Sotheby’s, a British auction house established in 1744 (and the oldest company listed on the New York Stock Exchange) was taking a 25 percent equity interest in Rob Myers’ classic car restoration and auction business.

At the time, Myers explained that, “No other organization in the world has a client base as far-reaching as Sotheby’s and since we have worked so closely and successfully with them in the past, it makes perfect sense that we form a strategic partnership that creates a truly worldwide platform for collector cars. It’s an exciting time in our company history, and for the hobby at large.”

RM was coming off its 35th anniversary year, a year in which it posted $140 million in sales at its annual Monterey auction.

Myers and Sotheby’s chairman Bill Ruprecht had been longtime friends; in 2013, RM staged its “Art of the Automobile” auction at Sotheby’s New York City headquarters gallery, where RM sold nearly $63 million in vehicles in just a two-hour span.

A second such sale was planned for the fall of 2015, but the potential partnership between the two auction houses and the rebranding of RM Auctions as RM Sotheby’s was a well-kept secret right up until the announcement was made.

It wasn’t too long after that deal was done that Ruprecht retired, replaced not by a fine-art auction expert but by the former head of Madison Square Garden. Recently, Sotheby’s started offering buyouts to some employees. “Tepid” was one word in a headline describing Sotheby’s art sales during 2015. After selling for more than $47 a share in late June, Sotheby’s stock was trading for less than $25 by mid-December.

So was the partnership a good deal or not for RM and the classic car marketplace?

“It was staggering,” said Alain Squindo, who joined RM in 2007 and is vice president of the renamed RM Sotheby’s. And Squindo wasn’t using the term in the way a boxer staggers after a solid punch, but in the amazing, astonishing, astounding sense of the adjective.

“At our Christmas party, Rob shared the results in a heartfelt and sincere way,” Squindo added.

Yes, that’s an airplane in the hangar at Auctions America’s California sale

Myers’ report on those results started with his gratitude for yet another best-of-show award from Pebble Beach for a car that emerged from the RM Restorations shop (Myers started in the restoration business but found himself taking so many cars to auctions that he figure he may as well start his own sales company) and continued to cover a year in which the RM group (which includes RM Sotheby’s and Auctions America) did a record $593 million in auction sales, in part because of new clients brought by Sotheby’s.

Squindo said Sotheby’s staff started to get into the swing of classic car sales at Amelia Island. Then RM Sotheby’s “set a single-vendor record” with it sale of the Andrews Collection, and by Monterey, “they (Sotheby’s) brought all kinds of bidders,” contributing to a record $172.9 million sale. Finally, the year was capped by the “Driven by Disruption” sale earlier this month at Sotheby’s NYC showroom, where the sale of 21 vehicles and several items of automobilia generated more than $72.5 million in a single evening.

The sale also featured the most money paid at any North American classic car auction in 2015 —$28.05 million for a 1956 Ferrari 200 MM. The car also was the most expensive ever sold by the RM group.

According to figures compiled by Hagerty, RM Sotheby’s sold five of the top-seven cars at North American auctions in 2015.

The New York sale coincided (by plan) with Sotheby’s sale of jewelry and collectible watches. Squindo said that while some “people came for the watches and stayed for the cars,” long-time RM clients also arrived in time for the jewelry and watch sales and hinted that some of Sotheby’s other traditional wares may become part of future classic car sales as well.

“We’re colleagues,” Squindo said of the relationship between the classic car staff and Sotheby’s team in New York City. “They’re our new friends and we’re introducing the Sotheby’s staff to cars.”

“What made our company attractive was that we’re a turn-key department,” a ready-made classic car sales department, he said.

And one that operates in a different mode than the traditional fine art auction business.