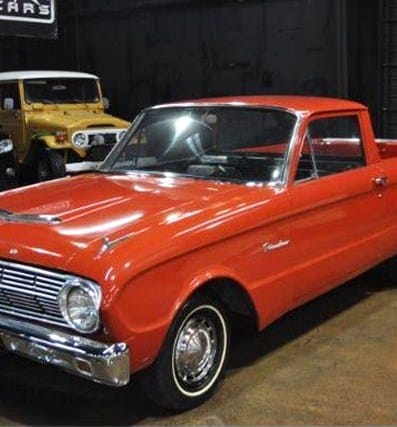 One of the hottest segments of the collector car hobby during 2015 has been classic pickup trucks. We have seen numerous 1960s and ‘70s pickups sell for some serious money, and when we say serious, we mean north of $30,000 with more than a few crossing the $40,000 mark. With prices at this level, the opportunity for a cool classic pickup might have passed you by.

Yet there are still affordable pickups if you are willing to think outside the box. Such as the Pick of the Day, a 1963 Ford Falcon Ranchero, that was designed to combine the drivability of a car with the capability of a pickup truck.

The Ford Ranchero is an affordable choice in vintage pickups

The original Ranchero, built from 1957 to 1959, was the first post-war American car to utilize the front end and chassis of a passenger car, in this case the full-size Fairlane, into a new kind of vehicle. Chevrolet followed suit with the El Camino.

In 1960, Ford completely redesigned the Ranchero, utilizing the compact Falcon platform to make for a smaller, more drivable and more economic truck. These smaller Rancheros are the ones I like best as the look combines the fun 1960s styling of the Falcon with a bit of added cowboy trim and that useful pickup bed in back. And fuel mileage is as high as 30 mpg.

The Nashville dealer advertising this Falcon Ranchero on ClassicCars.com says it is ready to drive with a three-speed manual transmission and six-cylinder engine, although the ad doesn’t say whether it has the standard 144 cid engine or the optional 170 cid six.

The car looks to be a nice driver-level example and would be the perfect truck to take empty to a classic cars swap meet and drive home with the bed filled with parts.

The asking price seems to be fair at just $7,999; I’ve seen Falcon Rancheros selling for double this amount.