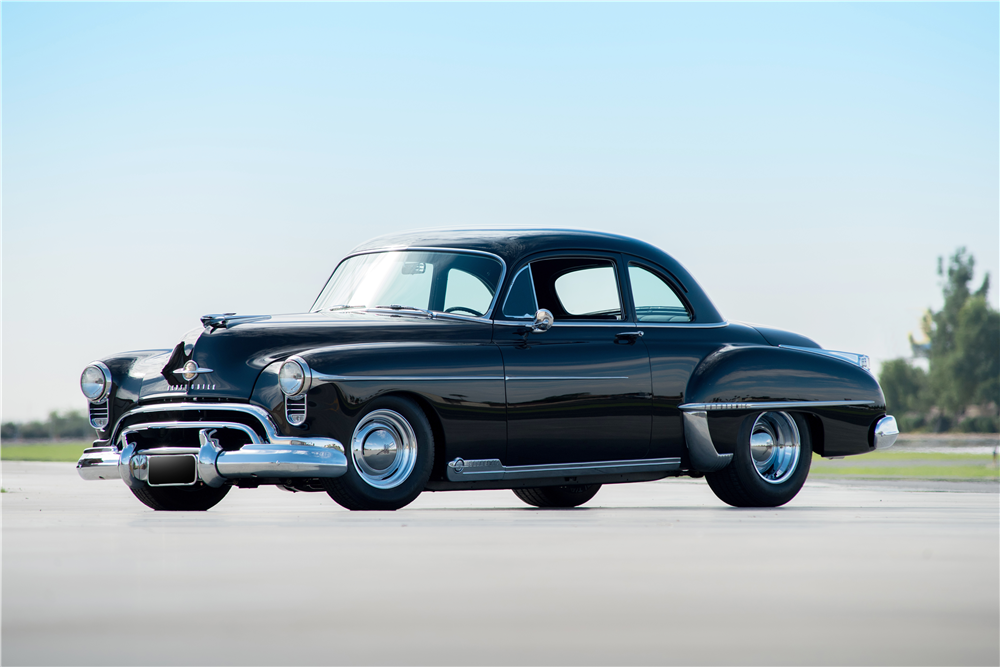 Editor’s note: This is the sixth in a 30-day sponsored series featuring cars to be sold January 23-31 during Barrett-Jackson’s 45th Scottsdale auction.

Oldsmobile had successfully challenged the garage-built hot rod in 1949 with its smooth and quick Rocket 88. The new car used the Futuramic B-body platform from the lightweight 76-model chassis but paired it with the powerful new Rocket V8 engine. This combination of a relatively small light body and large, powerful engine made it a precursor to the muscle car.

The Rocket 88 propelled Oldsmobile from a somewhat conservative car to a performer that became the one to beat on the NASCAR circuit. It won six of the nine NASCAR late-model division races in 1949, 10 of 19 in 1950, 20 of 41 in 1952, and was eventually knocked out by the powerful Hudson Hornet. Enthusiasts still consider the Oldsmobile 88 to be the first real “King of NASCAR.”

The car’s performance led to increased sales. The popularity of the Oldsmobile 88 went on to inspire a popular 1950s slogan, “Make a Date with a Rocket 88,” and also a song, “Rocket 88,” which is often considered the first rock and roll record.

This particular 1950 Oldsmobile 88 Futuramic originally came equipped with the Rocket V8. It had overhead valves, 303ci, a 7.25:1 compression ratio, 2-barrel carburetor and produced 135hp at 3,600 rpm and 263 foot pounds of torque at 1,800 rpm. The car was pretty powerful for its time and this one has since been highly modified.

The stock chassis has been modified and updated by Dick’s Rod Shop in Napa, California. The front suspension is that of the Mustang II with 2 inch drop spindles and power rack and pinion steering while the rear suspension is a ladder bar with four coilover shocks.

Powering the original Muscle car is a General Motors 502cid V8 built by Hoffman Enterprises in Richmond, California. The engine has also been upgraded and features a 9.6:1 compression with 532 horsepower at 5,200 rotations per minute and 597 foot pounds of torque at 4,200 rotations per minute, all being run by a Hilborn Electronic Fuel Injection system.

The transmission is a 4L80E electronic automatic that sends the power back to an Alston 9 inch rear end with Auburn Gear limited slip 3.00:1 gears.

The body and metal work was manhandled by Cotati Speed Shop in Santa Rosa, California, and Cotati applied the black finish paint. The black and red tuck and roll interior was fabricated by Howdy’s in Freemont, California.

Other amenities in this eye-catching but stock-looking car are air conditioning, tilt steering, cruise control and a 6-speaker stereo system.