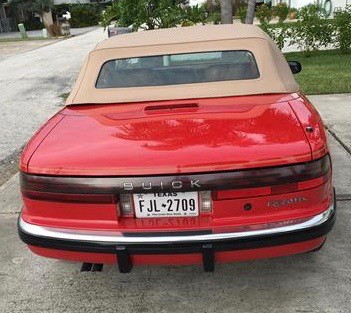 In the late 1980s, Chevrolet had its Corvette, Cadillac had its Allante, Pontiac had its Fiero and Buick had its Reatta (interesting, in retrospect, that Oldsmobile didn’t have a two-seater).

Buick unveiled its two-seat coupe in January 1988 at the Los Angeles auto show. The Reatta featured rounded if stubby styling, a luxurious interior and a surprising amount of storage room in locked bins behind the two seats and in the trunk. 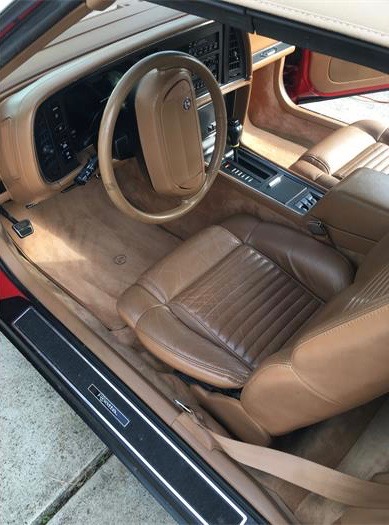 The car underwent an interior update when the driver’s side airbag became standard equipment for the 1990 model year, and the update included a new convertible version (the top is manually operated), which brings us to our Pick of the Day, a 1990 Buick Reatta convertible advertised on ClassicCars.com.

“The red paint is original, in great shape, and the car has a brand-new tan convertible top,” the seller continues. “The leather interior is in excellent original condition.

“The vehicle has 25,000 original miles and comes with service records showing the fine care it has received throughout its life.”

Like all Reattas, the car is powered by GM’s 3.8-liter V6, linked to a four-speed automatic and the front wheels. The car was rated at 18 mpg in town and at 27 on the highway and was a luxury cruiser for a couple.

Buick anticipated producing as many as 20,000 Reattas a year and set up a special assembly facility to build it craft-style rather than on a moving assembly line. But demand never met expectations and production ended after four years and only 21,000 units, of which only some 2,400 were convertibles, which also makes this nice-looking survivor a collectible rarity.