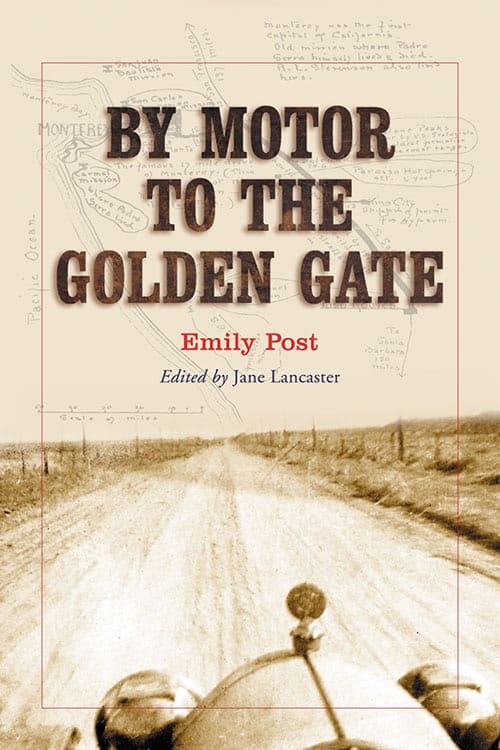 Much was made earlier this year about the Historic Vehicle Association duplicating the drive 100 years earlier from Detroit to San Francisco by Edsel Ford and a bunch of the scion’s buddies. Like Ford, the HVA drive was done in a 1915 Model T.

Historic as their trip might have been, Ford and friends were not alone as they crossed the country that year. According to HVA research, as many as 25,000 cars traveled to San Francisco from east of the Mississippi River to carry their occupants to the Panama-Pacific International Exhibition in the City by the Bay. 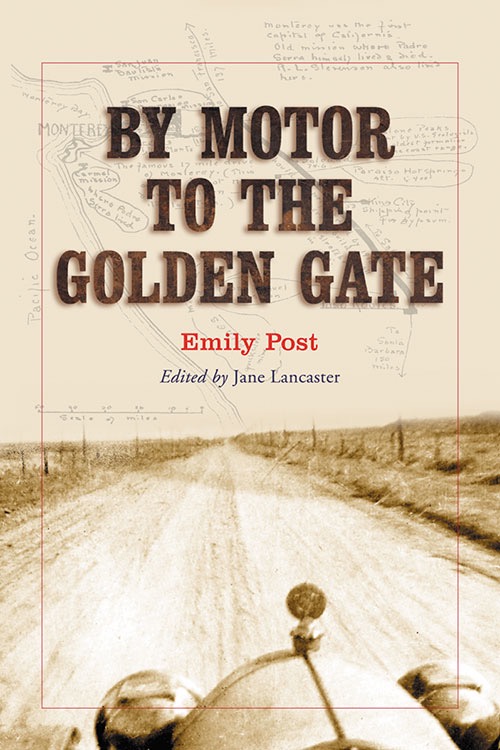 By Motor to
the Golden Gate
By Emily Post, edited by Jane Lancaster

Among those cars making that trip — and starting from New York City, not nearly midway across the country in Detroit — was one occupied by Emily Post who, it turns out, did much more than write about proper etiquette.

“Before she wrote Etiquette, the book that made her famous, Emily Post was in turn a sparkling debutante, a wronged wife, a divorcee, and a single mother trying to make a living,” notes Jane Lancaster, the historian who edited — with extensive footnoting — McFarland’s reprint of Post’s book about the trip she made in the company of her cousin Alice Beadleston, and Post’s son, Ned, who took time away from his studies as a junior at Harvard to serve as driver and mechanic for the ordeal.

On assignment from Collier’s magazine, Post was doing the drive not to determine if it might be possible to cross the country by motorcar — that had been done several times, and “was all the rage” that summer of 1915” — but to report whether it might be possible to make such a trip in comfort, which Americans had been doing for many years on the fine roads of European countries.

By the way, according to Lancaster’s research, we have no idea about the make and model of vehicle used by the Post party, only that it was custom-built by Watley’s in London, England, on a very long 140-inch wheelbase, with a convertible top, provided only 8 inches of ground clearance, ran on “very narrow tires,” and had an American engine.

Post decided on a Tuesday to make the drive and to leave for San Francisco at the end of that very week.

Sensible, even knowledgeable friends suggested that if she wanted to be comfortable, Post should ship the car to the West Coast and take the train across the country. Her selected route was to drive to Albany, from there to cross New York State to Buffalo, then on to Cleveland, taking the Lincoln “Highway” (in quotes because it was more of a trail than a highway) all the way across Nebraska, turning south through Colorado before turning west again across New Mexico, and Arizona and on to California, first to San Diego for its smaller celebration of the opening of the Panama Canal, then up to Los Angeles and on to San Francisco for the big show.

As far as traveling in comfort, that didn’t last very long. As for the car, it made it through mud and across mountains and as far as eastern Arizona, but finally was so damaged it had to be shipped by rail to Los Angeles for repairs.

However, as Post discovered, “in motoring, as in life, since trouble gives character, obstacles and misadventures are really necessary to give the trip character.”

To say the least, their trip had character, and characters. By Motor is Post’s delightful diary of the cross-country trip, complete with an accounting of daily expenses and her hand-drawn and noted maps, and her perspectives — often very frank and perhaps not as politely put as etiquette might have expected — about the people and places they visited along the way.