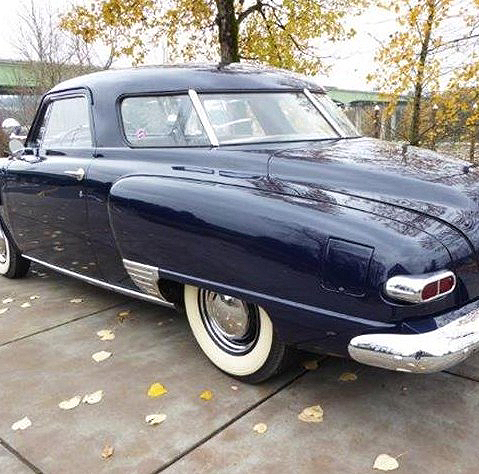 The original “push-me-pull-you” Studebaker coupe had car buyers scratching their heads when the wraparound rear window appeared in 1947 as a styling option. The common observation: you couldn’t tell whether it was going forward or backward.

By the time the Pick of the Day, a 1949 Studebaker Champion, came along, folks were accustomed to the unique backlight, and rear-seat riders appreciated the light and airy effect.

In 1950, the roofline styling received a name of its own, the Starlight coupe. That was also the year that the Champion received its flamboyant bullet-nose front that made it look jet propelled. But for 1949, the coupe still had the more-modest front-end styling, which some collectors find preferable.

The Gladstone, Oregon, classic car dealer advertising the Studebaker on ClassicCars.com says the car has been completely redone and is ready to enjoy.

“This beauty has had a good quality restoration done with lots of upgrades,” the seller says. “The paint is in great condition. The original engine has dual carburetors with a 3-speed transmission with overdrive. All the exterior chrome and stainless are like new.

“The cloth upholstery and carpet (have) been recently done and look great. The weather stripping has also been replaced including the window rubber. All the glass is in great condition without any cracks or stars.”

The engine is the car’s original 170cid inline-6 flathead that generated 80 horsepower, although the dual carbs could give it a slight boost in performance. With the overdrive, it should cruise easily at highway speeds, although the funky drum brakes of that era will require some restraint.

In light of the seller’s description, the $19,500 asking price sounds like a fair deal for what should be a fun attention getter.