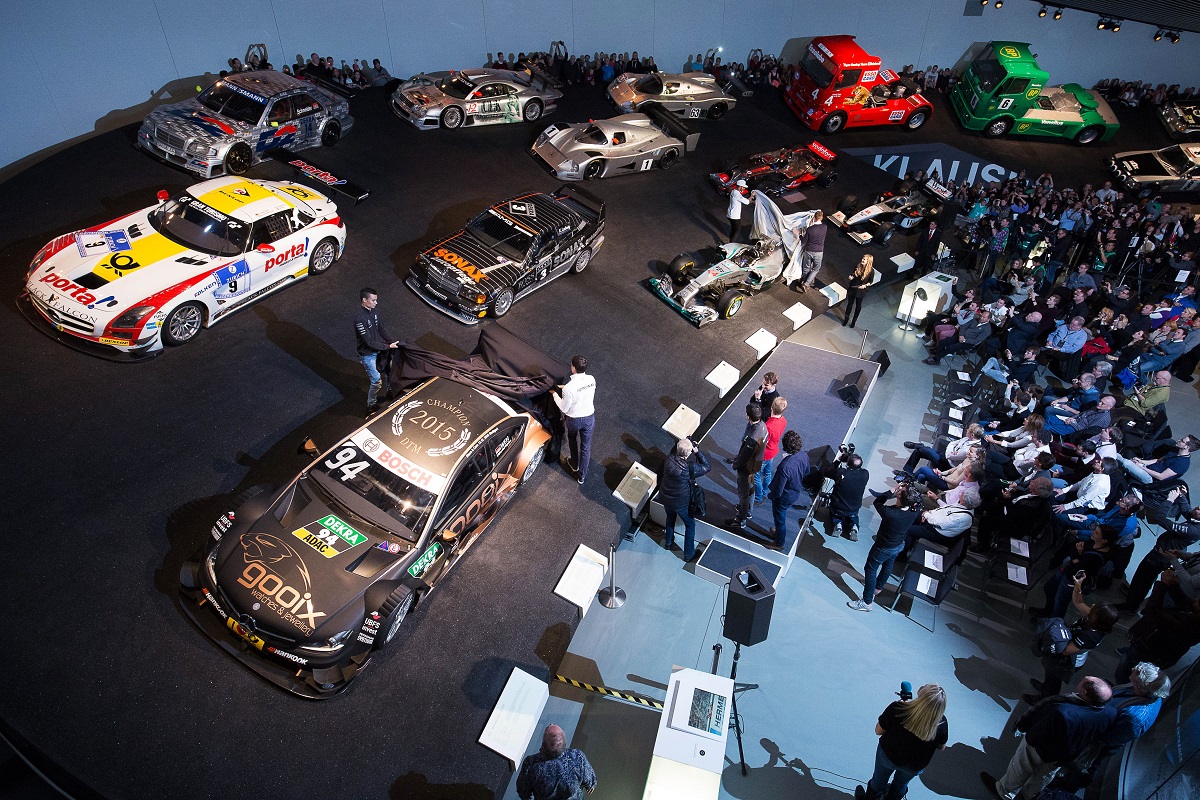 Today, the Mercedes-Benz Museum opens a new exhibit featuring the major championship trophies from the 2015 season. Also on display at the German museum are two more cars in the Races and Records area at the museum. One of them is the Mercedes AMG Petronas F1 WO5 hybrid that Lewis Hamilton used to win the 2014 World Championship Formula 1 Series.

LeMay – America’s Car Museum in Tacoma, Washington, kicks off its Drive Home event Sunday, December 27, with coffee and donuts and a chance to meet the drivers who will be taking three cars on a 2,400-mile road trip through the snow and ice on the way to Motor City for the opening of the North American International Auto Show.

On December 31, the World of Speed Museum celebrates New Year’s Eve and is open from 9  p.m. to 2 a.m. Attendees will be able to play and win prizes at the museum’s Victory Lap Casino, dance with music by DJ Clint Kuper, enjoy drinks, chocolates and a photo booth.

The Simeone Foundation Automotive Museum in Philadelphia has announced its full 2016 Demo Day schedule. Demo days are set to be held on the second and fourth Saturday of each month, with the first being January 23rd at noon.

The Blackhawk Museum, in Danville, California, will stage two Cars and Coffee events, the first set to take place on January 3 and the second, a collaboration with Silicon Valley Auto Show in San Jose, on January 10. Both events will be from 8 a.m. to 10 a.m.

The America on Wheels museum in Allentown, Pennsylvania, will have model trains stationed around the museum’s galleries on display through January 2.

The AACA Museum in Hershey, Pennsylvania, will have a “Cars and Christmas” display through January 3. The display features decorated trees, model train displays, special vehicles and other holiday fun.

The Gilmore Car Museum in Michigan begins a new lecture series January 10. The series will kick off with a look at the museum’s past 50 years. A complete list of events will be released later in the month.

The museum is also currently selling sessions to participate in the Model T Driving School. The Model T, built from 1908-1927, is operated by three foot pedals, one hand lever and two hand controls on the steering wheel. Participants will be able to get behind the wheel of these cars and drive around the museum grounds. To sign up for a class or to view the schedule, check out the museum’s website.

The “Museum in Motion” tours held by the National Corvette Museum in Bowling Green, Kentucky, begin again with the first tour scheduled for January 27-February 1, 2016. Participants will be able to visit the Daytona International Speedway, among other things.  Other tours include a visit to Tucson on March 7-12, the Tail of the Dragon tour May 1-4, and the Marble and Glass tour through New England from May 19-22.

The Auburn Cord Duesenberg Automobile museum in Auburn, Indiana, has a new exhibit that will run through October 3, 2016. Hoosier Made: World Driven will look at the heyday of Indiana.