A tale of black and white — and green

Back in August, we published a story about the “Green Book” exhibit at the Gilmore Car Museum in Michigan. To refresh your memory, The Negro Travelers’ Green Book was published by a New York City mail carrier, Victor Hugo Green, who enlisted his fellow mail carriers around the country to help him compile and update lists of places — restaurants, hotels, gasoline stations — that would accommodate African-American travelers. 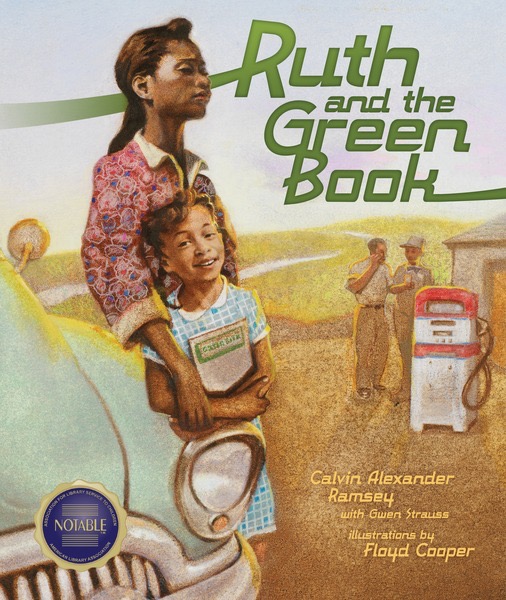 About the time we were working on our story, The New York Times was publishing a pair of articles about photographers, playwrights and filmmakers who were documenting Green’s life and the impact his book had on black families during the Jim Crow era.

One of those working on such a project was Calvin Alexander Ramsey, a playwright from Atlanta who in 2010 had published a children book, Ruth and the Green Book.

The book, written with Gwen Strauss and with illustrations by Floyd Cooper, shares the story of Ruth, a girl from Chicago who was traveling with her parents to visit her grandmother in Alabama in the family’s brand new 1952 Buick.

“After driving for a long time,” the family stopped for gas, but the service station attendant wouldn’t let the family use the whites-only rest room.

“Mama and I had to go into the woods,” Ruth says. “I was embarrassed.”

They were informed there was no room at the inn for their kind when they stopped at a hotel, so they had to drive all night. Fortunately, Ruth’s mother had brought plenty of food because they also were refused service as restaurants.

In Tennessee, they stopped at the home of a man with whom Ruth’s father served during World War II. When the left the next month, the man told them they could buy fuel at a certain brand of stations, so they did. There, the service station attendant told the family about the Green Book, so they bought a copy for 75 cents, and the trip resumed.

Ramsey’s book may be written for children, but it also provides a way for parents (and grandparents) to start a discussion with those children about prejudice and civil rights and right and wrong and about a time that may now seem long ago, until you read today’s headlines or watch the news.