A story (for all ages) about The Greatest Race

The large illustrations, limited text and 48-page format would seem to indicate that The Greatest Race is a book for children. But I’m not really so sure.

I’m usually credited with knowing more than the average person about auto racing (one of my former beats as a newspaper reporter and later as an editor at AutoWeek), but there were at least three things in Dwight Knowlton’s newest book about the heralded 1955 Mille Miglia that I either didn’t know or somehow had forgotten. 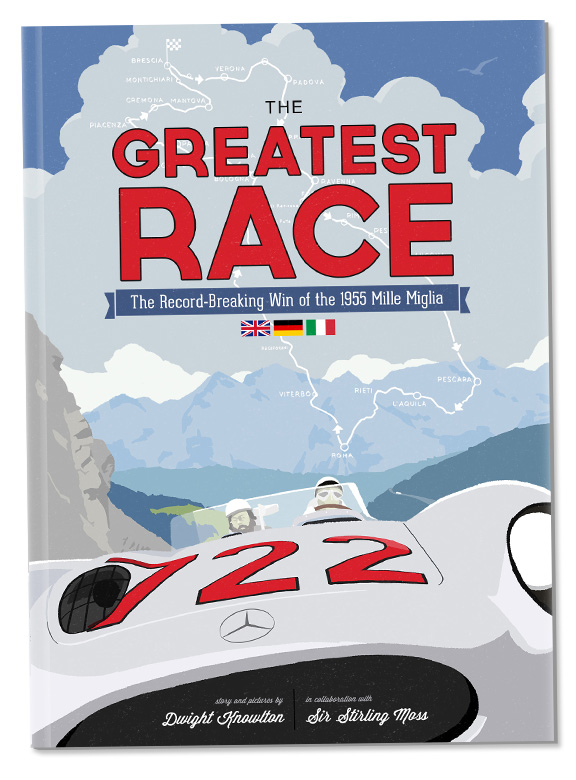 The Greatest Race: The Record-Breaking Win of the 1955 Mille Miglia
By Dwight Knowlton with Stirling Moss

And no, I’m not going to tell you what those things were. Read the book and see what you learn and then we can compare notes.

We’ve encountered Knowlton’s work before. His first book, The Little Red Racing Car, has been widely acclaimed as a wonderful father-son reading experience.

Knowlton, whose professional career involved marketing and graphic design and illustration, wrote the red racer out of frustration. He wanted a book about cars to share with his young son but couldn’t find one, and decided to write one himself. So he did.

Knowlton’s original plan was to use the red racer to launch a series of such books. A red Italian car. Next up: A silver German car. To be followed by: A green British car. Etc.

But somewhere between Italy and Germany, Knowlton met Stirling Moss and Knowlton was intrigued by the Moss-Jenks victory in the Mille Miglia. Then Knowlton met someone from Mercedes-Benz who offered access to the company’s archives, and the result is this book with a cover that bears both Knowlton’s and Moss’s bylines.

The book tells the story of the race, and Knowlton’s illustrations show wonderful historic accuracy. Just wait until you see the pages showing Jenks’ notebooks, roller box and hand signals.

Do you want to order copies for your young children or grandchildren as part of your holiday gift-giving? Of course. However, you’ll also want to order a copy for yourself as well.