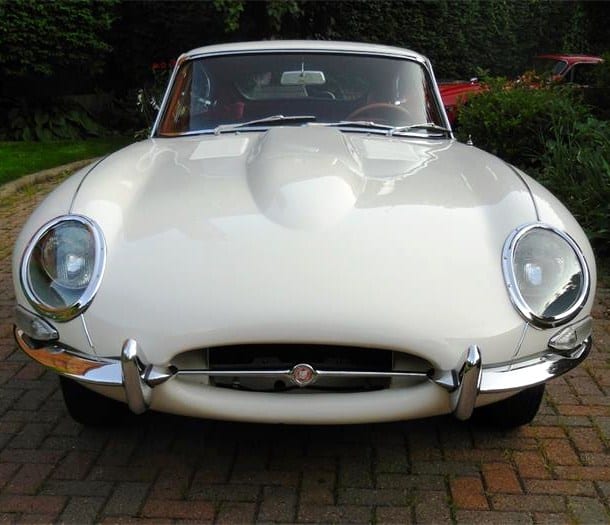 I would be the first to admit to being a sucker for a pretty face, and here’s a perfect example. The Pick of the Day is sex on wheels, about as gorgeous as a car can be, and at least for me, love at first sight.

The 1963 Jaguar E-type coupe is hauntingly beautiful, and the photos leave little doubt that the Jag is as described by its Pittsburgh, Pennsylvania, owner: “Totally restored to concours condition.”

According to the private seller’s listing on ClassicCars.com, the XK-E is a numbers-matching car with just 52,700 miles showing on its odometer. In gleaming white paint and red leather interior, this early E-type with covered headlights looks absolutely splendid, and the owner makes no bones about its condition. “Mint” is how the seller rates both the exterior and the interior.

Even under the hood, beauty prevails, the seller says: “Currently the engine is detailed to the 9’s with polished cam covers, polished SU carbs, etc.”

“This is a no-excuse, perfect E-type,” the owner adds.

The car was built October 31, 1963, the ad says, and delivered to Madrid, Spain, where the original owner was an air force captain, although the seller does not say whether he was an officer in the U.S. or Spanish air force.

The car is primarily in original condition although the ceramic-coated manifold is hooked up with stainless-steel headers and ANSA exhaust, the ad says. For the purists, the original exhaust manifold and mufflers are included. The Jaguar also includes a complete tool kit, jack and knock-off hammer, and the original Blaupunkt radio also works perfectly; “I had the radio reconditioned in Germany.”

Such beauty, grace and perfection do not come cheaply, and the owner is asking $145,000, which is not unreasonable according to the latest Hagerty price guide. Sure, you could get an E-type coupe for less, but it would most likely cost all that and maybe more to bring it up to the perfect condition that this owner claims.