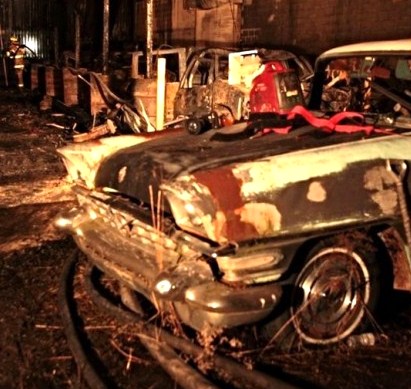 A devastating fire destroyed a warehouse used by America’s Packard Museum near Dayton, Ohio, consuming a number of classic cars, irreplaceable parts and artifacts, and restoration facilities. The building is separate from the museum itself, which is located in the city of Dayton.

The fire discovered early Thursday morning is being investigated by Harrison Township fire officials, and according to latest reports, the exact cause of the blaze has not yet been determined, although arson is strongly suspected.

America’s Packard Museum, which is not connected with the National Packard Museum, released a statement regarding the fire. Efforts by Classic Car News to reach museum officials have not been successful thus far.

“The staff and volunteers at America’s Packard Museum are heartbroken by the vandalism and fire that occurred last night at our warehouse on Ome Avenue,” the museum statement says. “As the investigation into the cause and scope of damage are still under way, we are attempting to come to grips with the enormity of the loss of irreplaceable vehicles and artifacts. The Harrison Township Fire Department went above and beyond any reasonable expectation in preserving a great number of valuable vehicles.”

The museum, housed in a restored Packard dealership in Dayton, continues normal operations today and over the weekend, according to the statement.

The warehouse was one of three adjacent but unrelated buildings damaged in the fire. Fire officials believe the blaze might have been purposely set in part of the museum structure that was not secured from intruders.

No further information has been released regarding the extent of the loss or the number of cars destroyed, but some cars reportedly were saved from the fire.