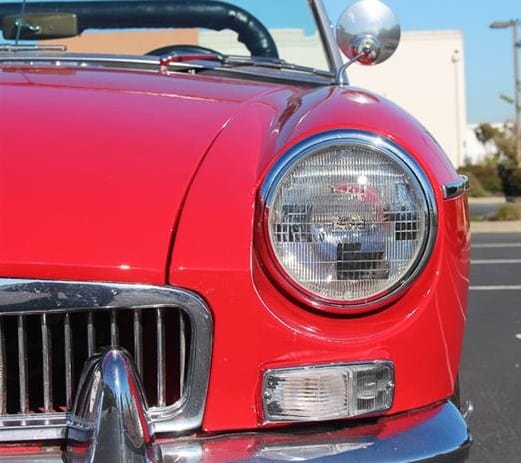 When the talk turns to affordable classic sports cars, the first one considered is often the MGB, Britain’s most-successful roadster. Hundreds of thousands of them were sold in the U.S. during the 1960s and ’70s, and while  MGB values as collector cars have crept up over the years, they remain quite inexpensive, rarely crossing $20,000 for the very best examples.

The earlier models are the most desirable, such as the Pick of the Day, a 1965 MGB Mark 1 roadster offered by a classic car dealer in Fairfield, California. This MG is a 67,000-mile car that has been thoroughly restored, according to the listing on ClassicCars.com, with fresh red paint and original black-leather interior. And the asking price is just $14,990.

The car has a rebuilt drivetrain, new front suspension, and new wire wheels and tires, according to the dealer, who adds, “It performs admirably on the open road and has some serious curb appeal as well.” The gallery of photos shows a very clean, apparently rust-free MGB that also looks fresh under the hood.

“Overall, this 1965 MGB Roadster is an amazing little sports car that’s been brought back to life in a spectacular way,” the dealer says.

The thick roll bar is a good safety feature but not aesthetically pleasing, looking heavy and clunky. And that black luggage rack on the trunk has got to go – it should be chrome. It needs to be ditched for a correct reproduction replacement, which is readily available in the aftermarket.

The 1965 model is an early “pull handle” car, so-called because its door handles pull out for entry rather than the later push-button handle style. These, plus the original-style interior, grille, smooth fenders (without the later DOT side marker lights) and other details make the early cars especially valued by serious MGB enthusiasts.

When well-maintained, MGBs are sturdy and reliable, and there are many good ones out there. Because of their popularity, all classic MGs enjoy extensive parts support and just about everything is available. They are simple cars and easy to work on, plus there are plenty of MG clubs and events to enjoy.

For less than $15,000, this MGB could be a good entry into the classic car hobby, as well as an enjoyable driver for a veteran British sports car enthusiast.