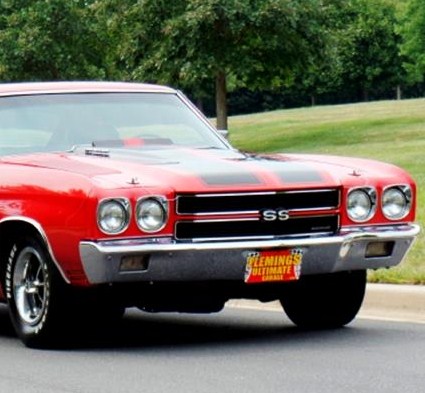 The 1970 Chevrolet Chevelle SS LS6 is an authentic restored original, the seller says

For GM muscle cars, model-year 1970 brought together a mighty confluence of ingredients, when big-block technology and evocative styling joined up for a final blast down the quarter mile before emission controls and insurance rates ended the game on a high note.

One result was the mighty Chevrolet Chevelle SS LS6, fitted with a race-bred 454 cid V8 conservatively rated at 500 horsepower, which was linked up to the mandatory Rock Crusher heavy-duty 4-speed manual transmission and Positraction rear. Available for one year only, the LS6 is considered an apex of U.S. muscle-car performance for all time, and the car has long been a sought-after collector’s item.

The Chevelle LS6 is a Holy Grail for GM muscle fans

The Pick of the Day is a 1970 Chevrolet Chevelle SS LS6 hardtop in bright red with wide black stripes that the listing on ClassicCars.com describes as authentic and with a show-quality restoration to its original factory specs.

“One of the rarest muscle cars ever created with Chevrolet’s most powerful engine ever offered,” the Rockville, Maryland, classic car dealer says in the listing. “Beautiful restoration and loaded with options.”

The Chevelle was restored by “an experienced Chevelle expert, at a HUGE expense,” the seller says, with the full complement of correct options that came with this upgraded LS6, including the SS Rally dashboard with 6,500-rpm tachometer, sport suspension, power disc brakes, functional cowl-induction “flapper” hood and Super Sport wheels with BFG radial T/As.

The asking price of $89,990 seems reasonable enough if this rare Chevelle LS6 is everything that the seller describes, especially considering that the Hagerty value guide pegs the value of the car in excellent condition between $130,000 and $172,000. And even if you could find one with needs, the restoration could quickly go past the asking price here.

Or, as the dealer noted, “This is the way to buy one. Already done!”