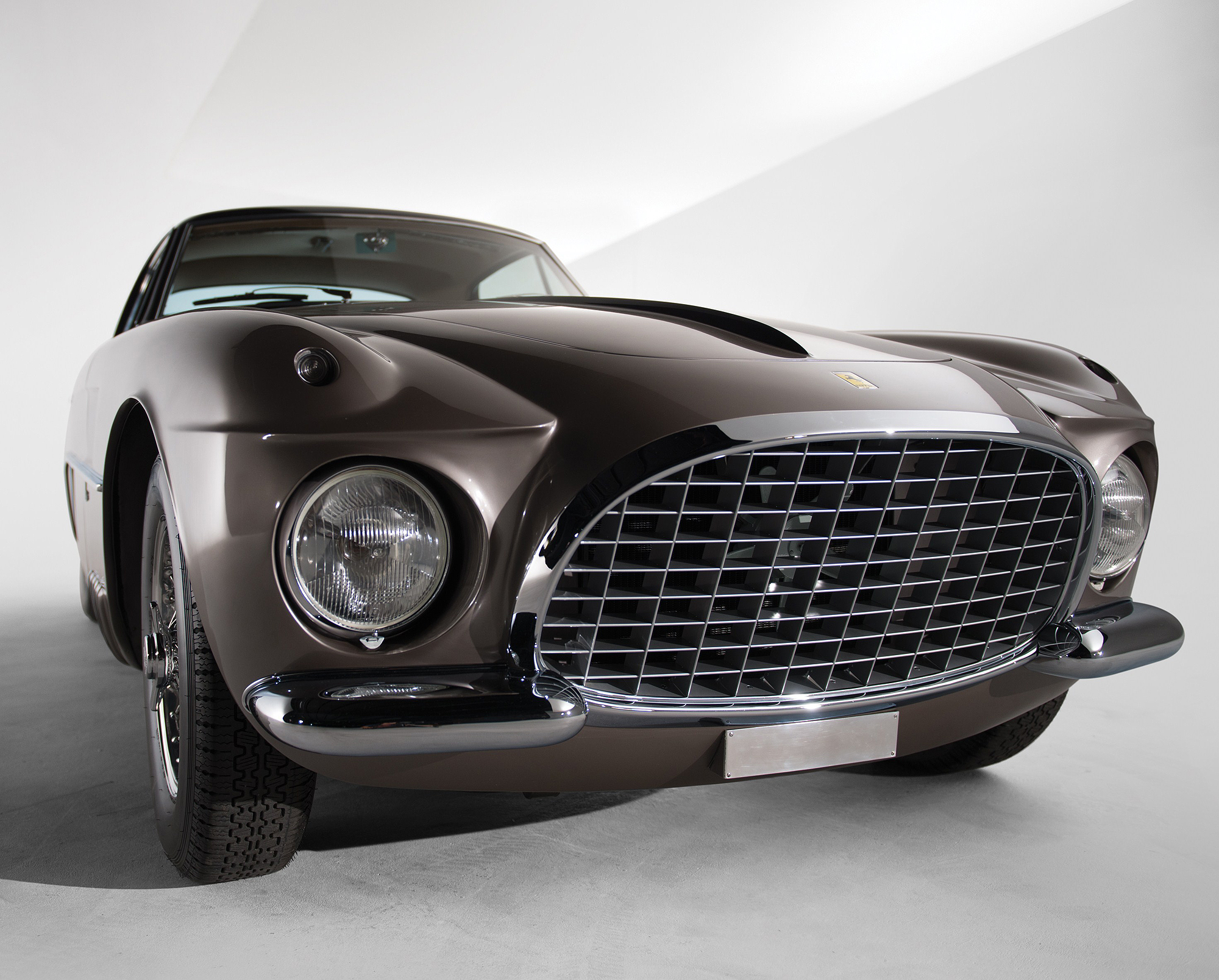 The Europa Vignale, chassis number 0313 EU, has a checkered history ranging from the glory of the New York auto-show stage to becoming a daily driver and finally a forgotten relic in longtime storage. The unique Ferrari was rescued in 2003 and later restored to original, a task completed in 2011 and which brought the Ferrari back to its auto-show splendor.

Ferrari’s relationship with Carrozzeria Vignale of Turin lasted only from 1950 to 1954, but during that time, the design house created some of the most distinctive bodies for the Italian automaker’s early cars. Of the 22 examples of the 250 Europa built by Ferrari, only four were individually styled by Vignale; the other 18 were bodied by Pinin Farina.

The Vignale coupe’s luscious body shows many of the hallmarks of the coachbuilder’s distinctive designs of the early ’50s, such as the stark combination of sharp angles and rounded forms, low headlights, large grille and a proliferation of louvers and air inlets. The fastback roofline was a precursor of popular sports-coupe shapes that came a decade later.

RM Sotheby’s values the unique Ferrari at $3.8 million to $4.5 million.

Chassis 0313 EU was delivered in December 1953 to U.S. Ferrari importer Luigi Chinetti Motors in New York City, and a month later, the car was displayed by Chinetti at the World Motor Sports Show at Madison Square Garden. After the show, the Europa was purchased by a Massachusetts man who kept it for four years before reselling it through a dealer to George H. Parker of Rome, New York, for $4,900 plus the trade-in of an Aston Martin, according to RM Sotheby’s catalog description.

Parker used the spectacular Vignale coupe as his daily driver for the next two years, and when he was married in March 1959, he and his bride drove the Ferrari cross-country to Southern California, where Parker had taken a new job.

The car was later sold to a California Cadillac dealer, who replaced the car’s original Lampredi V12 engine with a supercharged Chevrolet V8; such engine swaps were common in those days since Ferrari engine parts were so difficult to source. The bumpers were removed and the nose was repaired after a minor accident.

The Chevy-powered Vignale Europa went through several subsequent owners before being stored away in California shortly after a resale in 1976. The car was rediscovered in 2003 by collector Tom Shaughnessy, who sold it six years later to Ferrari restorer Heinrich Kämpfer of Seengen, Switzerland. Kämpfer immediately shipped the car to his homeland to begin restoration.

That work was done mostly by Kämpfer, who already had earned a reputation for accurate and high-quality Ferrari restorations. It was a complex undertaking that entailed reproducing missing parts, sourcing the original-type Bruno Siena lacquer paint and recreating the lush interior, including leather seats and trim produced by the car’s original 1953 upholstery maker, and custom Wilton wool carpeting.

The V12 engine, with matching number 0331 EU, was found in mostly complete condition, but the block was damaged beyond repair. A new block was cast by Ferrari Classiche to the original specifications, according to the catalog, and the correct-type gearbox was fitted.

The restoration took an estimated total of 3,800 hours. The restored coupe debuted in 2012 at Concorso d’Eleganza Villa d’Este in Italy, where it won the Trofeo Foglizzi for best interior design. Its restoration was highlighted in an issue of Cavallino magazine with an 11-page feature.

The Vignale coupe has had two subsequent owners and several other show experiences, including appearing at the 60 Years of Ferrari celebration on Rodeo Drive in Beverly Hills in 2014 and the 2015 Cavallino Classic. It was again a magazine profile subject in the November 2014 issue of Automobile.

The Ferrari 250 Europa Vignale coupe joins 30 other “creatively styled and pioneering motor cars” that will be offered at the RM Sotheby’s Driven by Disruption auction, which takes place December 10 at Sotheby’s 10th floor gallery in Manhattan.

For more about Driven by Disruption, visit the auction website.