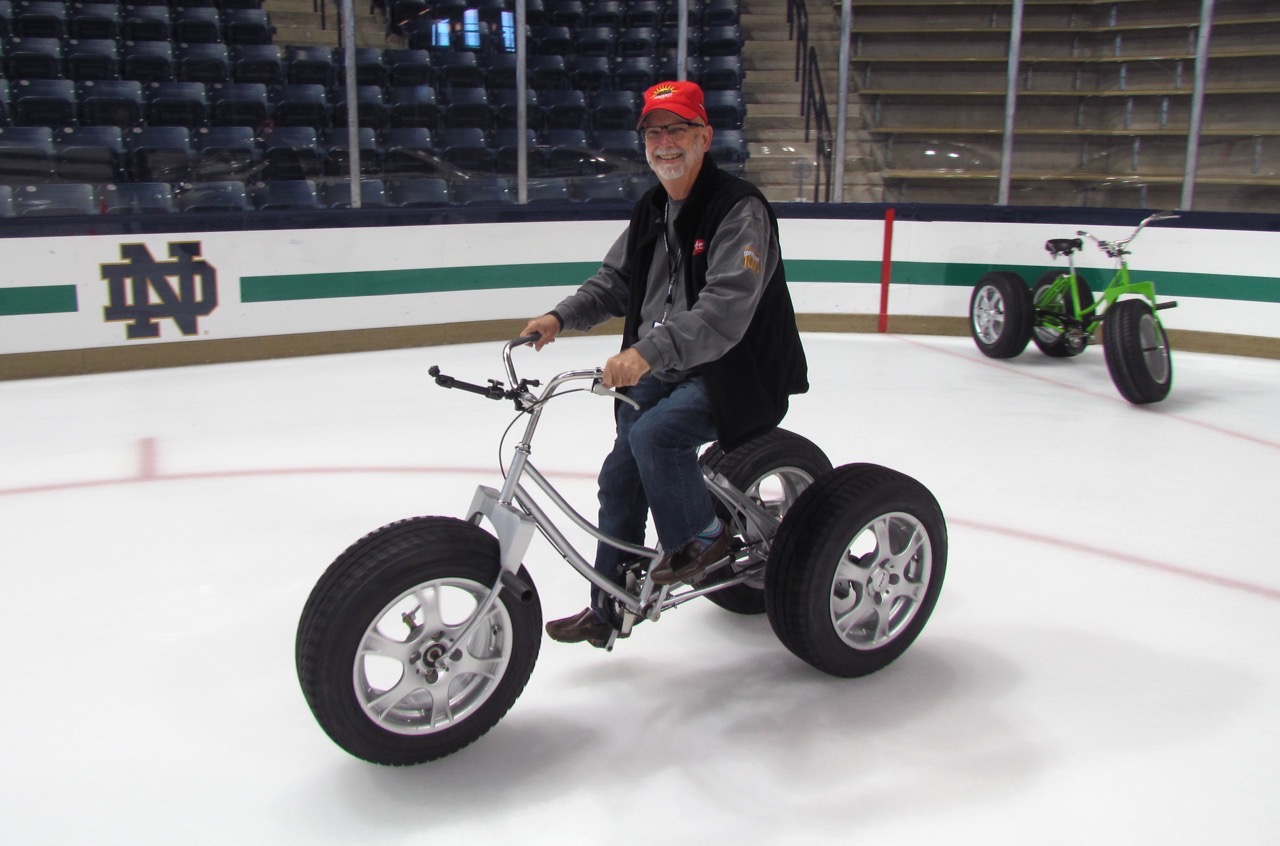 I’ve driven a variety of vehicles, from a Model T to a modern Ferrari, from a bump-steered Bobcat to an intuitively operated Segway, and from a three-wheeled Morgan to — most recently — a three-wheeled bicycle, aka tricycle.

Actually, two specially built, grown-up sized tricycles, identical except for their tires. One was equipped with the sort of all-weather tires found on the majority of cars on the roads of North America. The other wore a set – well, three-quarters of a set – of Bridgestone’s newest Blizzak winter tires.

Winter tires! What does that subject have to do with classic cars? After all, if you put winter tires on your classic car, it’s probably because you live in the Snow Belt and you own only that one, aging vehicle — classic in its experience rather than its provenance — and therefore it must serve year around as your daily driver, regardless of weather conditions.

Most classic car owners who live where it gets cold, white and icy on a regular basis simply put their collector vehicles in the garage for the winter months and drive something newer, something equipped with such computerized driving aids as ABS and ESP, perhaps even with AWD.

Note: AWD is the abbreviation for all-wheel drive, not for all-weather drive. If there is a winter-weather advantage to all-wheel drive, it’s in acceleration from a stoplight at an icy intersection. Oh, and should you slide off into a ditch while you drive, with AWD you might have enough grip to make your way back onto the roadway, though your odds of success are much better with true, lock-into-place four-wheel drive, which AWD is not.

Oh, and chances are those contemporary vehicles you drive in the winter are shod with all-weather tires like those on the tricycle I rode recently on the ice rink usually reserved for the skates of the University of Notre Dame ice hockey team.

Bridgestone built its trikes a few months ago to showcase its new Ecopia line of tires. Ecopias are designed to enhance vehicle fuel economy. To demonstrate their reduced rolling resistance — something like 10 percent of vehicle fuel is burned simply to overcome its tires’ inherent reluctance to roll — the trikes were equipped, one with Ecopias and the other with standard tires. Pedal up to a decent speed and then coast, and much farther on the trike with the Ecopias.

Someone wondered if the trikes might also be an effective way to show the newest Blizzaks’ capabilities. Indeed they did.

We drove AWD crossovers and front-wheel-drive sedans on the Notre Dame ice rinks — an experience in itself. The most eye-opening part of those exercises was how AWD provided an advantage only off the line, not in turning (or perhaps we should say attempting to turn), or in stopping.

Speaking of stopping, here’s the difference we experienced with winter and all-season tires: At 10 miles per hour, winter tires stop you an average of eight feet sooner, or the difference between safety and burying your bumper in the trunk of the vehicle ahead of you. At 30 mph, the difference is 63 feet, or stopping for a light or running through an intersection.

But you don’t need four wheels to experience the advantage winter tires provide any vehicle. Simply put them on a trike.

Or, actually, put a set of supposedly all-season tires on a trike. Start to pedal and you simply sit there with your rear wheels spinning. You have to reduce your rpm to get the trike moving. Once you do, making turns is something you do carefully, and with a wider arc that you want. Stopping from any sort of speed can be a frightening experience, especially as the distance between you and the boards around the rink diminishes.

Now, move over to the trike with the Blizzaks and you start to move as soon as you start to pedal. You can make turns pretty much as usual and stopping distances may be longer than on dry pavement, but can be accomplished without much drama — or any threat of running into the boards.

Riding the trikes on the hockey rink demonstrates the differences between winter and all-season tires, the latter of which really have been misnamed because in much of the continent, they’re really three-season tires.

OK, one paragraph for those interested in engineering technicalities: Winter tires (here’s why they don’t call them “snow tires” any more) are created with tread compounding so they remain pliable in cold temperatures, with tread patterns with “biting edges” so they grip even in the snowy conditions, and with tread depth to dig their day through as the snow piles up.

Think of it this way: Tires are the shoes for your car. Open-toe sandals might be fine year around in Phoenix, but you don’t want to wear them in January in Chicago.

Woody Rogers, resident tire expert at the Tire Rack, suggests that if snow and ice and temperatures of less than 40 degrees Fahrenheit are realities of your residence, you have winter tires on your vehicle during those months when you can see your breath in the morning, or, as he puts it, from Thanksgiving to tax time.

If you have a high-performance sports car, you put “summer” tires on its wheels, right. It’s the same idea with winter tires, except at the other end of the spectrum.