Espionage: The no-longer secret story of the carbon fiber Mustang 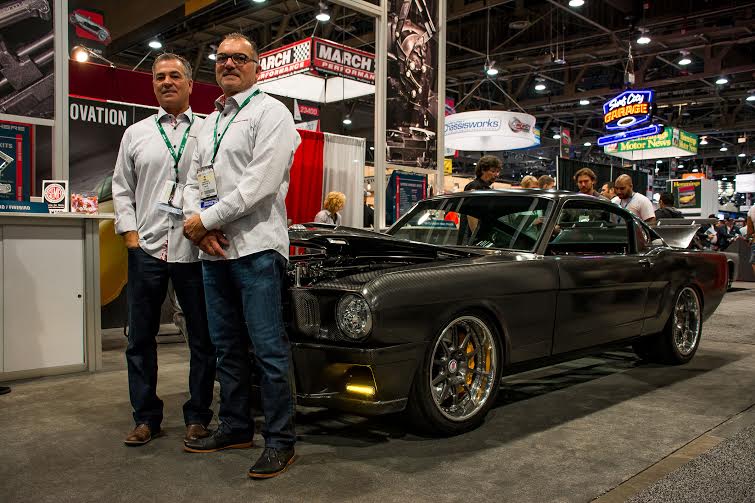 Recently, Mike and Jim Ring, the RingBrothers, worked with a Russian client, whom they have never met and for that matter, never spoke with directly, to develop an off-the-wall car that will be shipped to London after the 2015 SEMA Show this week in Las Vegas.

For this seemingly mysterious client, the car’s name, Espionage, seems appropriate. But regardless of the owner, the car is significant because the 1965 Ford Mustang has a carbon fiber body.

“We think a lot of younger people will be into it because they like carbon fiber and will become attracted to the older body styles,” said Mike Ring.

Jim Ring said that it is always a goal to be different, especially in an industry with so many creative people.

“It forces us to try and do different things,” he said. “The use of carbon fiber is really coming in strong and we think it is a big piece of the automotive future.”

According to the RingBrothers, the car looks exactly like a classic ’65 Mustang, but is four inches wider. “We put two inches into each side, in the fenders, doors, and so instead of ‘just’ making a carbon fiber Mustang, we made it even more unique.”

The RingBrothers’ booth features a carbon fiber rolling chassis with motor as a display to show SEMA Show visitors how the project started.

“A lot of people are like ‘what, why would you paint it?’ But we have been working with carbon fiber for quite a while,” one of the brothers explained. “We call the car Espionage because we are kind of hiding all the carbon.”

What makes the car even more unusual is that the carbon fiber is not just an outer skin; the inner structure and outer also are all carbon. The RingBrothers said that you can take a complete 1965 mustang door and it will “perfectly fit ours. It shows how much time went into the inner components of the car.”

The RingBrothers said that the Carbon Fiber was difficult to work with, “Its one thing to build just an outer skin in carbon fiber, but we have the full inner structure of the car,” Mike Ring said.

While the car at SEMA is going to London, the Rings think the carbon platform would make for a “bitchin’ electric car. The carbon weight savings makes it perfect.” Jim Ring said.

At the end of the day everyone understands it’s impossible to make everyone happy. The RingBrothers say they want to be “rebels, and do things differently to get noticed, good or bad.”