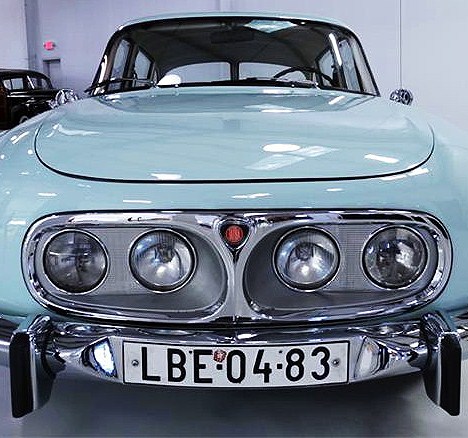 The 1966 Tatra T603’s unique front styling, a step up from its former three-headlight form

The strangely appealing Tatra T603 is yet another unique product from the Eastern Bloc, a hand-made Czech luxury car with a rear-mounted V8 designed for the elite of the Soviet-dominated society, such as Communist Party bigwigs, diplomats, military brass and industry leaders.

Rarely seen in this country, the Pick of the Day is a 1966 Tatra T603 that was on longtime display in a museum before being refreshed by a subsequent California owner and now listed on ClassicCars.com by a Missouri classic car dealer.

“Finished in a stunning Sky Blue with a beautiful Dark Blue interior; the previous owner of this magnificent motor car acquired it from a museum, where it had been on display for many years,” the dealer says in the ad description. “It is in mostly original condition and drives and performs exceptionally well.”

Though decidedly odd-looking in a streamlined sort of way, the T603 seems downright conventional compared with the three-eyed, fin-backed sedans of Tatra’s earlier days, cars that have become beloved attention getters in recent years at car shows and concours events. This T603 should also garner plenty of looks, especially in what appears to be immaculate original condition.

“Truly one of the nicest examples of this extremely rare and sought-after motor car,” the dealer states. “A collectors dream!”

Tatra was known for its innovative and technologically advanced creations under the leadership of visionary engineer Hans Ledwinka, whose fascination with aerodynamics shows in his avant garde designs. There is strong evidence that Ferdinand Porsche was inspired (or stole) the design concept for the original Volkswagen beetle from Ledwinka’s concepts, although Tatra’s protests at the time were pretty much drowned out when Nazi Germany invaded Czechoslovakia. In 1965, VW paid off Tatra to settle the controversy.

The Tatra has a 2,545cc air-cooled V8 engine hanging out behind the rear axle that produces 100 horsepower, enough to motivate the relatively light car although the rear weight bias reportedly results in some interesting oversteer. The T603 was admired for its luxurious drivability during the 20 years it was produced.

The gallery photos with the ad listing show the apparent nice condition of this unusual sedan. In contrast with the cutting-edge body design, the interior looks fairly straightforward with seating for six.

The asking price seems reasonable at $39,900 for a car that definitely will stand out anywhere it goes.

For a look at how Tatra originally marketed the T603, take a look at this whacky 1962 video on YouTube that shows the all-conquering Tatra terrorizing the Czech countryside and befuddling the local police.  Get ready for some weird whistling.