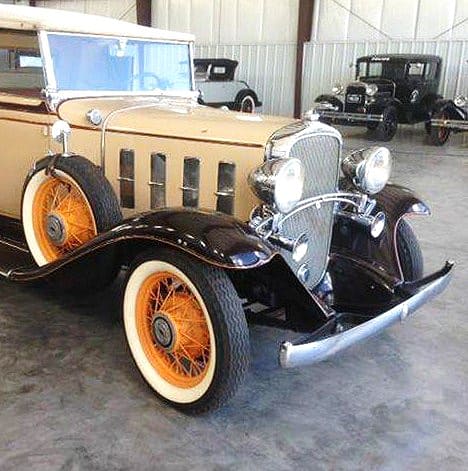 The 1932 Ford gets all the attention from hobbyists – the Deuce Coupe, flathead V8 and all that – but let’s not forget that Chevrolet also had a stylish model competing for the hard-earned Depression-era dollars of regular folk.

Although this Pick of the Day, a 1932 Chevrolet Confederate Deluxe cabriolet, was aimed a bit higher than everyman, adding a full package of luxury trim and features to the basic Chevy.

Located in St. Simons Island, Georgia, in what appears to be a warehouse filled with a dealer’s inventory of pre-war American iron, the restored rumble-seat cabriolet is trimmed out with all the period options, including dual side-mount spares with attached mirrors, chrome bumpers and windshield frame, dual horns on either side of the radiator, cowl lights, landau roof bars and a fanciful eagle mascot on its radiator cap. The chrome side vents on the hood came standard on the Confederate Deluxe.

“You don’t find too many of these 32s still around, and when you do, most have been turned into hot rods,” the dealer says in the ClassicCars.com listing. “Many refer to the 32 as the baby Cadillac.”

The Chevy is an older restoration, the dealer adds, that still “runs and drives excellent” with an engine that is “smooth and quiet.”

“Paint, interior, top, and tires are a little tired but still show well,” the listing says. “Chrome bumpers and grille are both in nice shape. Overall a driver-quality car that you can enjoy now and take to the next level if you so desire.”

The Confederate moniker was applied by Chevrolet for the upscale version of its 1932 models, and powered by an improved version of the “Stovebolt Six,” a 194 cid valve-in-head inline-6 engine that put out 60 horsepower, comparable with Ford’s new V8. The three-speed transmission has a free-wheeling mode that allows the car to coast when the driver lifts off the throttle.

This classic Chevy seems like a fair deal at an asking price of $22,900 for a veteran car that is ready to go, though still with some needs.  It would be a fun car to have around and take on Sunday drives, especially for those who get to ride in the rumble seat on a crisp fall afternoon.