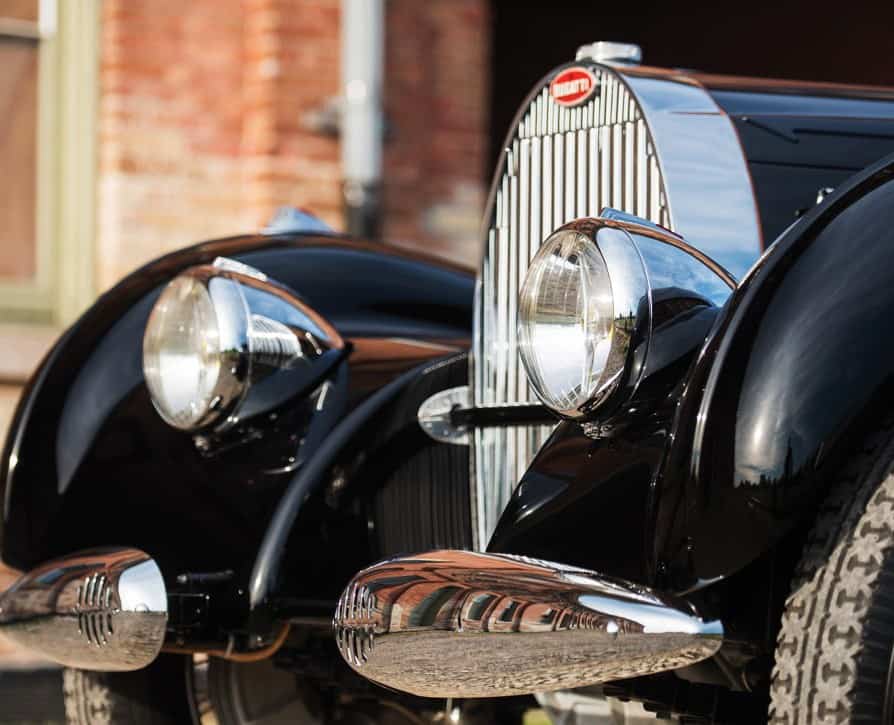 One of the world’s most famous and exotic pre-war cars, a 1938 Bugatti Type 57C Atalante coupe, goes to auction December 10 during RM Sotheby’s Driven by Disruption sale, bringing yet another legendary automobile to the New York City event.

The final Atalante of the series of 32 dramatically styled cars, and one of only 12 sculpted in aluminum, this coupe debuted at the French Pavilion of the 1939 New York World’s Fair, where spectators were stunned by its spectacular Art Moderne design that seemed more like a contemporary artwork than an automobile.

The Bugatti was found after five decades in storage, then restored

The Atalante, powered by a supercharged 3,257cc straight-8 engine and the latest in chassis, suspension and brake technology, was considered the most advanced automobile of its time. The coupe was a racer as well as a looker, taking part in a number of motorsports events following World War II while in the ownership of competition enthusiast Al Garthwaite, the founder of the Algar Ferrari dealership in suburban Philadelphia.

The historic Bugatti was also a famous “barn find,” rediscovered in 2007 after being stored for decades in the vast garage of Macy’s heir John W. Straus, who had put it away in the late 1960s after driving it for years. After Strauss’s death, the Atalante was found and pulled out into the sunlight for the first time in a half century.

From there, the magnificently distressed car appeared in “preservation” classes at a number of concours events, including the 2007 Pebble Beach Concours d’Elegance, the Saratoga Automobile Museum in New York and the American Bugatti Club’s annual meet at Watkins Glen.

The Bugatti was raced in motorsports events after World War II

The Atalante then began a comprehensive restoration with an eye toward retaining and preserving all that could be kept original. After completion, the Bugatti returned to Pebble Beach, where it took part in the Tour d’Elegance and won second in class at the concours.

The Atalante will join around 30 “creatively styled and pioneering motor cars” at the Driven by Disruption auction that takes place in Sotheby’s 10th floor gallery in Manhattan. Among them, a historic 1956 Ferrari 290 MM race car, a 1961 Aston Martin DB4GT Zagato, a 1955 Ferrari 500 Mondial and Janis Joplin’s famous psychedelically painted 1965 Porsche 356C cabriolet.

RM Sotheby’s  value estimate for the Atalante ranges from $2.2 million to $2.5 million.

For more information about Driven by Disruption, see the auction website.