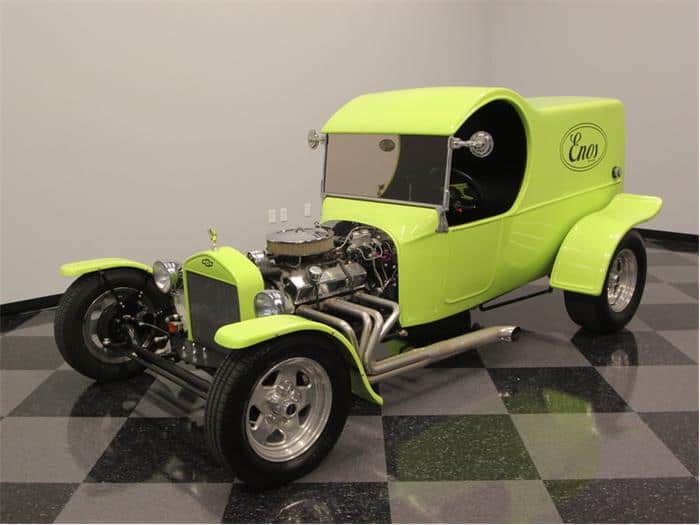 This custom hot rod screams “look at me!” It stands out, demands attention and perhaps has the ability to attract flying saucers with its glowing paint, as the seller suggests.

The Pick of the Day is a 1923 Ford Model T that has gained only 550 miles since the custom build was finished, according to the seller. Along with its bright, eye-catching yellow paint and C-cab body, the car has a side decal that is removable, leaving room for your own message.

The interior is clean and has a touch of class, the ClassicCars.com listing states, with a sports steering wheel complete with the Chevy bowtie in the center and a tall, upright gear-change lever. All the gauges in the car are Omega Kustoms set into a wood panel, which the listing states gives the car a “traditional touch.”

The car has a side decal that is removable, leaving room for your own message

While the car’s interior may appear a bit cramped, it features a locking back hatch that has storage space behind it, which the seller says can “fit chairs, coolers, and of course, trophies.”

Powering the Model T is a 350 cid V8. It was rebuilt with “go-fast parts” such as a Holley Strip Dominator aluminum intake manifold and Holley performance carburetor, the listing says, and the headers have an unfiltered connection to those rumbling side pipes. The engine is exposed and the seller says the car has such chrome upgrades as the air cleaner, fan shroud, alternator and valve covers.

The engine is mated to GM’s TH700 R4 overdrive automatic running a B&M converter lock-up with a control on the dash. Other modifications include disc brakes in the front, wide Goodyear Eagle GTs holding up the staggered rear end, and Centerline forged wheels all around, making this hot rod ready for the street or strip.
The car is offered for sale by a dealer located in Lutz, Florida for $24,995.