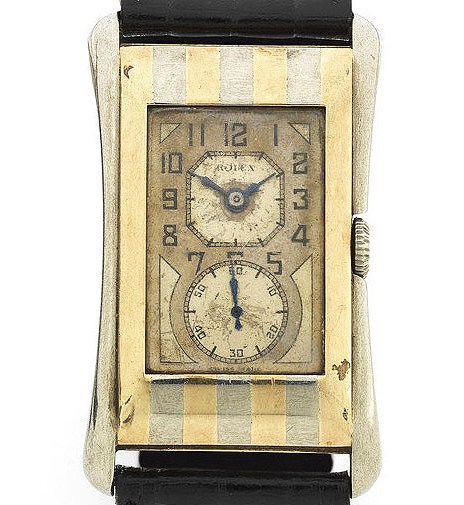 Donald Healey, wearing the Rolex, shows an engine at the Triumph factory during the 1930s | Bonhams photo

For the many admirers of British automotive visionary Donald Healey, Bonhams has a coveted piece of his personal history coming up for auction: Healey’s vintage Rolex wristwatch.

The 9ct gold Rolex Striped Prince that Healey wore for much of his life (1898-1988) will be offered for the first time during Bonhams’s Bond Street Motor Car Sale in London on December 6. On the reverse side of the rectangular watch is the inscription, “Donald Healey, Perranporth,” in honor of his birthplace of Perranporth, Cornwall.

Healey purchased the watch during the 1930s to mark his success in rally racing, such as winning seven Glacier Cups in the Alpine Trials.

“Donald was justly proud of such rallying success,” his grandson, Peter Healey, said in a Bonhams news release. “The Rolex was a reward to himself.”

Donald Healey is best-remembered for development of one of Britain’s most popular sports car brands, Austin-Healey. Before founding his own automotive company in 1945, he worked for Triumph, where he led development of the Triumph Gloria and designed the supercharged straight-eight Triumph Dolomite, which he drove in the Alpine Trial of 1936.

With his own company, he initially created Healey cars, and he collaborated with other manufacturers on such projects as the Nash-Healey. In the 1950s and ’60s, he developed Austin-Healey sports cars, and in the ’70s, the Jensen-Healey.

“The Bonhams Bond Street Motor Car Sale presents a fantastic selection of motor cars, including two of the most important Austin-Healeys ever offered,” James Knight, Bonhams Group Motoring Director, said in the news release. “To offer the Rolex Striped Prince, worn by the great man himself, plus his much-loved everyday car – the– and the 1959 Works Rally 3000 ‘SMO 746’ is simply extraordinary.”

For more information about the Bonhams sale, see the auction website.