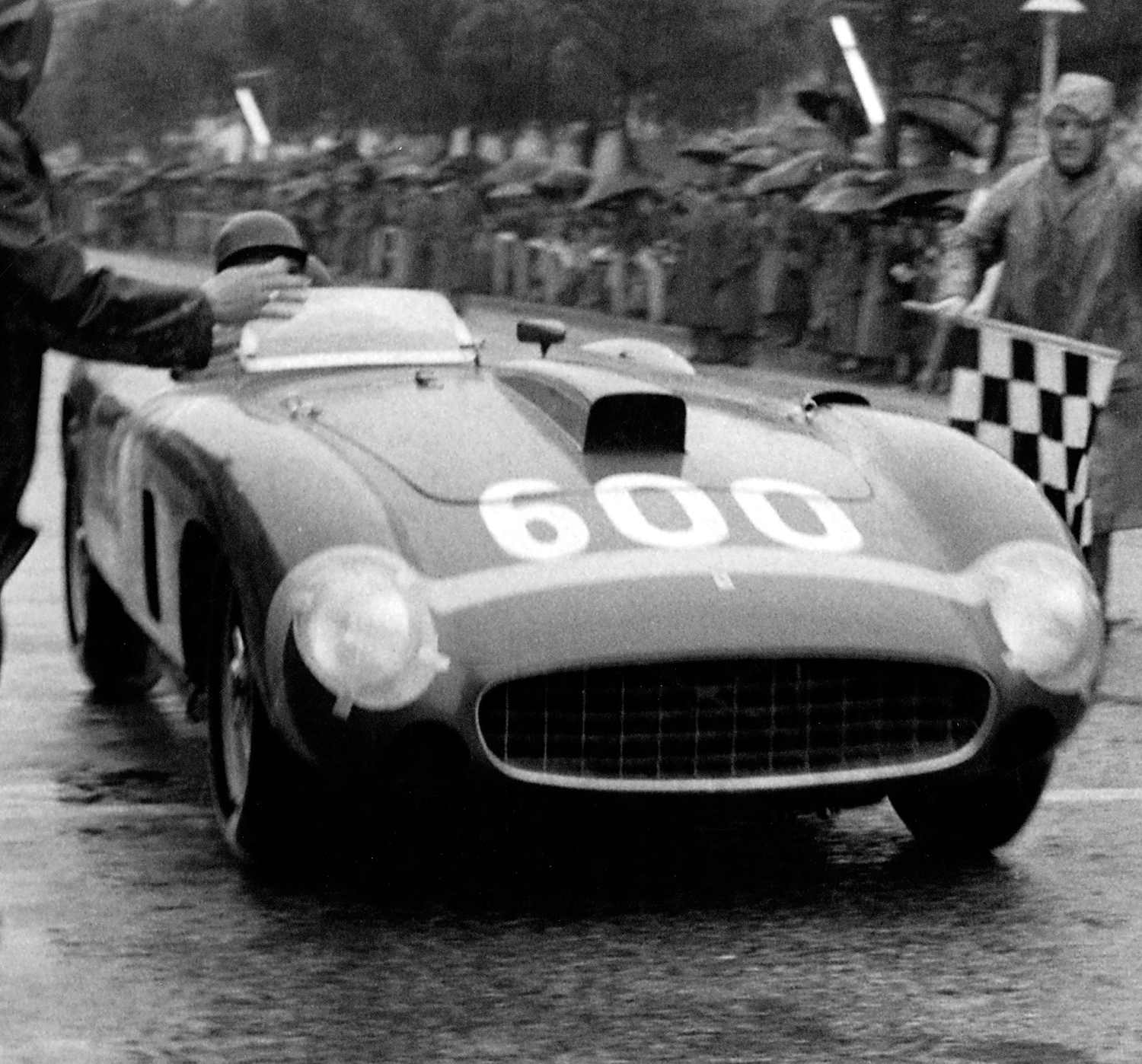 The history of 1956 Ferrari 290 MM, chassis 0626, is almost breathtaking.  This superb works Ferrari bodied by Scaglietti was built specifically for five-time F1 World Champion Juan Manuel Fangio, arguably the greatest racing driver of all time, to compete in the 1956 Mille Miglia.  He single-handedly finished the 1,000 km race fourth overall in a driving rainstorm.

After its premiere race with Fangio, the stunningly beautiful sports racer went on to be driven by a virtual who’s who of legendary drivers, including future F1 World Champion Phil Hill, and finished first in the 1957 Buenos Aires 1000 km driven by Eugenio Castellotti, Luigi Musso and Masten Gregory.  Other famed drivers of the car include Wolfgang von Trips, Alfonso de Portago, Peter Collins, Olivier Gendebien and Joakim Bonnier.

The 290 MM was never crashed and stands in essentially original condition with its unique factory Argentinian color scheme honoring Fangio, the auction company said.  One of just four 290 MMs built and featuring its original drivetrain, including its then-newly developed 3.5-liter V12, the Ferrari will be offered at auction December 10 during RM Sotheby’s Driven by Disruption sale in Manhattan, New York.

The auction company calls the 290 MM “undoubtedly one of the greatest, most original, and most valuable cars ever offered at public auction.”  No pre-auction estimated value is presented, for obvious reasons.

“It’s hard to know where to start when describing just how important this 290 MM is,” Peter Wallman, car specialist for RM Sotheby’s, said in a news release. “Driven by the greatest drivers of the 1950s and built for possibly the greatest driver in history, this is a car with which Enzo Ferrari was personally involved and is a fundamental part of Ferrari folklore.

“Its originality, coupled with its extraordinary provenance and history, which are truly second to none, can only lead you to conclude that it is one of the most desirable and valuable cars that will ever come to the open market.”

Chassis 0626 was a key component of Ferrari’s 1956 and 1957 Manufacturer’s World Championship-winning teams, and it competed in many of the great classic races during its career.  In 1957, the Ferrari was sold through Ferrari importer Luigi Chinetti to U.S. enthusiast Temple Buell, a friend of Enzo Ferrari, who raced the car around the world driven by Gregory and Bonnier. It was subsequently raced by two Ferrari team owners through 1964, when it was sold to a private collection.

The 290 MM remained in the United States until it was acquired by collector Pierre Bardinon, who kept it in his renowned Mas du Clos Collection in France for almost 34 years before the car was purchased by its current owner.

In the news release, RM Sotheby’s notes that 0626 is Ferrari Classiche certified and that, “It remains the best of all the four examples built, having never fallen victim to the crucible of motorsport, and retaining its original chassis, matching-numbers engine, gearbox and body. It comes to auction accompanied by an extensive history file and is eligible for all major historic events, including its 60th anniversary at the Mille Miglia next year.”