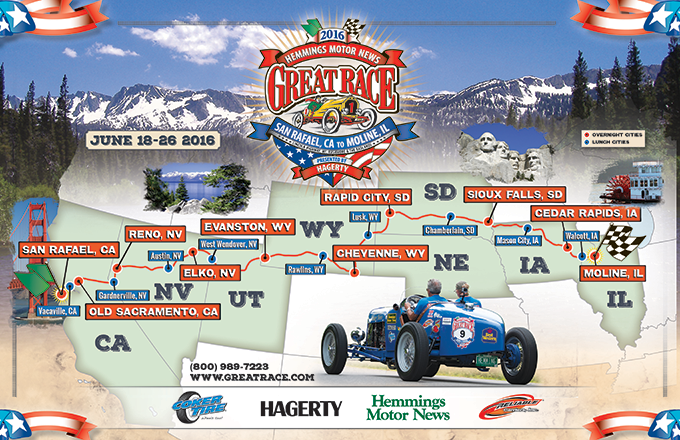 The Great Race, a competitive but speed-controlled road rally on public highways for classic and collector vehicles, has announced its 2016 route and city stops for its race, which includes the historic Lincoln Highway and stops at the Bonneville Salt Flats, Mount Rushmore and the Badlands.

The journey will start June 14 in San Rafael, California, where participants can enjoy winery tours, an optional day trip to San Francisco, catch the classic 1965 movie, The Great Race and go through tech inspection and complete the registration process.

June 18 the eight-day race begins as teams make their way across California passing through Vacaville and Old Sacramento. Teams enter Nevada the following day, passing through Gardnerville, with dinner at the National Automobile Museum in Reno. Other stops in Nevada include Austin, Elko, and West Wendover.

On June 21 the teams are expected to enter Utah and visit the Bonneville Salt Flats, followed by a drive to Evanston, Wyoming, where they will get an overnight stay at the Union Pacific Roundhouse. The teams will pass through Rawlins and Cheyenne.

On June 23, the car visit Rapid City, South Dakota, with a visit to Mount Rushmore and an optional trip to see the Crazy Horse monument. The Badlands is the next attraction along the way as teams head to  Chamberline and Sioux Falls.

The final leg of the race is June 25 as the competitors make their way through Iowa — Mason City, Cedar Rapids and Walcott before crossing the finish line in Moline, Illinois.

Great Race officials exepct more than 400 people — racers, support crews and staff — to participate in an event that pays $50,000 to the winner.

The exact route will be kept secret and revealed to participants an hour before they are set to take off. Teams are given course instructions and are not permitted use of GPS or maps. However, they are allowed to have an analog clock.