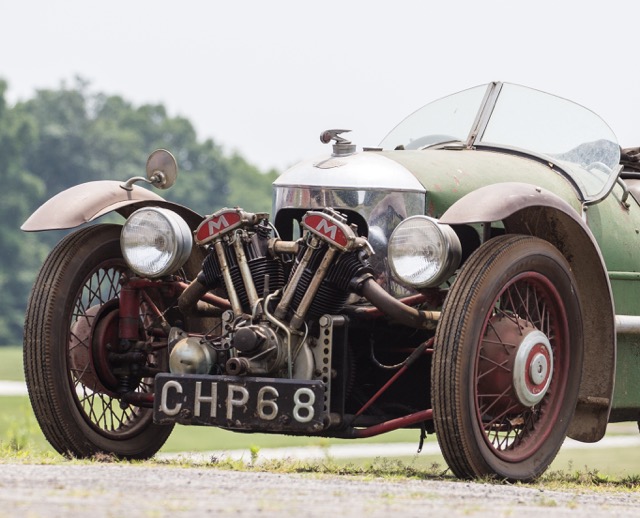 Bonhams’ “Preserving the Automobile” auction at the Simeone Foundation Automotive Museum in Philadelphia is timed to accommodate people headed to Hershey for the huge AACA Fall Meet, which features a massive swap meet where people buying ancient autos might find many of the parts needed to keep them in running order.

The fourth annual Bonhams sale, held Monday at the museum which has championed preservation over restoration, posted an 86 percent sell-through rate and $3.3 million in sales. The auction included not only its typical fare of unrestored automobiles but also pre-Civil War locomotives. The locomotives had been part of the Chicago Museum of Science & Industry collection and sold to what Bonhams termed “institutional” buyers.

Prices paid for two of the locomotives placed them among the auction’s “top 10” high-selling vehicles.

That list was led by a 1936 Wanderer W25 K roadster with coachwork by Wendler. The car, designed by Ferdinand Porsche and offered from a “prominent European collection,” sold for $319,000.

Second on the list was a 1908 Rainier Model D 44/50HP seven-passenger touring that formerly spent more than 60 years in the Buess collection. The car was offered for public sale for the first time in its 108-year history and sold for $253,000, an auction record.

“Among automobiles, it was the unrestored cars that commanded the greatest attention and, as a result, many made records,” Bonhams reported in a news release.

For example, a unrestored 1937 Morgan Super Sports three-wheeler from the Du Pont Collection sold for $88,000, more than three times its pre-sale estimated value.

Automobilia also was offered, and had a 99 percent sell-through, with a one-of-a-kind Oilzum advertising diorama selling for $11,875.

“We’re very pleased with this year’s sale,” Eric Minoff, Bonhams head of sale, said in a news release. “We had keen international interest, a strong sell-through rate, impressive results with many individual lots making records, and a well-attended, highly successful auction.
“This year’s event once again demonstrates that motorcars with sound provenance and in original condition are increasingly sought after by collectors.”

(All prices include buyer’s premium)