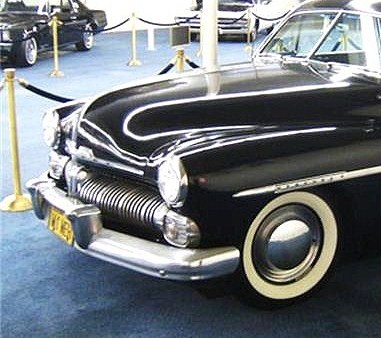 The 1950 Mercury coupe is described as an ‘original, unmolested’ survivor

The 60th anniversary of the fatal crash of Hollywood icon James Dean was September 30, which passed without all that much hoopla. Although Dean was killed in his Porsche 550 roadster, there is another classic car that remains strongly associated with the film star: The custom 1949 Mercury coupe he drove in Rebel Without a Cause.

The Pick of the Day is a 1950 Mercury two-door coupe, essentially the same as the 1949 model, and highly unusual in that it remains in all-original condition, the seller says, rather than being turned into a chopped and channeled “lead sled.”

The Mercury has had the same owner for more than 30 years, the seller says

Custom post-war Mercs received some major attention this year when they were featured in a special class at the Pebble Beach Concours d’Elegance in August. But this one is untouched, an apparently unrestored classic two-door Mercury in its best paint scheme of glossy black.

In the brief description with the listing on ClassicCars.com, the Las Vegas dealer uses plenty of exclamation points to express the rarity of this coupe.

“Ultra rare find!! An all-original unmolested 1950 Mercury Coupe!!” the seller writes. “Has been owned by the same person for over 30 years!”

The Mercury is a California car, the seller says, powered by its original 255 cid V8 engine and three-speed manual column shifter. Although there is no indication whether the car has been repainted or partially restored, the photos show that the body is in good condition and the interior remains in fairly decent original condition.

The exterior photos show some odd-looking striped seat covers, but the interior pictures reveal plain bench seats with what seems like the 65-year-old factory upholstery. The striped covers must have been removed for the interior shots. The correct Art Deco dashboard looks very nice.

The seller asks potential buyers to contact the dealership for pricing. According to the latest Hagerty price guide, the average value of a 1950 Mercury coupe in just over $27,000, with top values from $40,000 to more than $50,000 for cars in excellent condition.