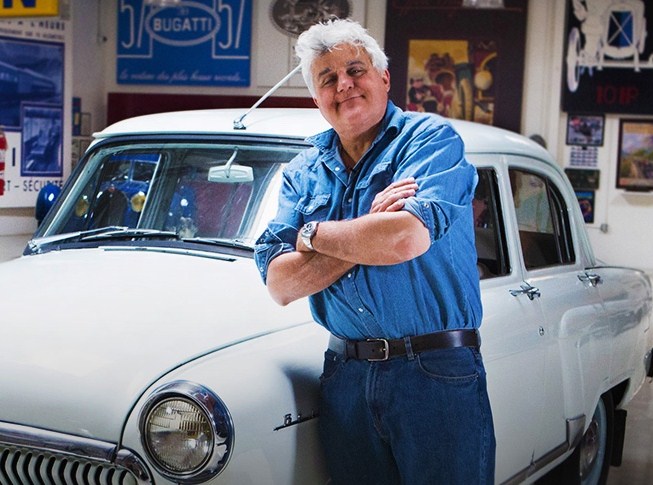 Jay Leno is having way too much fun. That’s obvious from watching the premiere of Jay Leno’s Garage, which aired Wednesday night on the cable network CNBC.

There’s Jay driving a classic Hemi-powered muscle car, and then doing smoky donuts in a burnout competition in Dodge Challenger Hellcats with fellow comedian and gearhead Tim Allen. And there’s Jay learning to flog a Super Comp dragster at drag racing school, then cruising around the Los Angeles hills in a top-secret General Motors concept car from the distant past, with GM design chief Ed Wellburn in the passenger seat.

Way too much fun, but at least he’s invited anyone with cable TV along for the ride.

Leno opened his new weekly show driving a terrific 1971 Dodge Challenger R/T Hemi coupe as he dedicated the first one-hour program to American muscle cars with the quip, “We could call this episode, when dinosaurs ruled the earth.”

Jay Leno’s passion for cars and motorcycles is legendary. It’s an all-pervasive fascination that he pretty much kept under wraps during his decades of hosting the Tonight Show, except for such times as when Allen appeared as a guest.

But now he’s letting loose at full throttle, spinning his popular YouTube series of the same name into a prime-time cable TV feature that looks like a winner.

Leno is also a legendary car collector, with his Big Dog Garage – actually a series of huge hangars at the Burbank airport  – housing his outsized enthusiasm with more than 300 choice vehicles that range from Triumph motorcycles to classic Duesenberg town cars. Expect to see that space featured in future shows, as it was in past YouTube videos.

He did take one of his own collector cars out for a spin, a 1965 Ford Shelby Mustang GT350, which Leno said he’s owned for 30 years after lusting after one since the age of 15 when the car was new. It is while driving the GT350 that Leno makes his most telling remarks about his love for classic cars.

“Then there are cars like this one that have both.”

Then there was that top-secret GM concept car, named Pegasus. Never heard if it? That’s because GM brass were not keen on design chief Bill Mitchell’s project of combining a custom-bodied Pontiac Firebird with the V12 engine of a Ferrari 365 GTB/4, so it was kept hidden away. The engine for Pegasus, by the way, was gifted by none other than Enzo Ferrrari.

Wellburn brought Leno into GM’s secret design lair near Los Angeles where the Pegasus stood concealed under a black tarp. He pulled it off with a flourish to reveal a shapely, candy-red Firebird with an Italianesque front end and a number of chrome accents. Leno got to drive the unique car, commenting to Wellburn on its shrieking Ferrari exhaust note rather than the expected big-block V8 rumble.

The segment with Allen was pretty hilarious as the two funny car guys reprised a burnout competition from 20 years ago on Tonight, which Leno soundly lost, with a grudge match in the 707-horsepower Challenger SRT Hellcats.

“We need to clear the air,” Leno said in the tongue-in-cheek routine as they stood in Allen’s own collector-car warehouse. “Let’s get two equal cars in performance, and we’ll each get in one and see who does the best.”

Leno challenges Allen to the burnout rematch at Allen’s garage

They meet up with the Hellcats on a wide expanse of rural asphalt, where Leno says in mock seriousness, “I think we do this maturely, we do it as grownups, and we do it without trashing each other.”

“Good idea, no trash talk, we do it like men,” Allen replied as he put on a crash helmet that said in back: “Jay sucks.”

Of course, much trash talk ensues before they took off in smoky, tire shredding burnouts, which went on for quite some time accompanied by Leno’s overdubbed jokes: “Two identical matched cars. Two identical idiots. But only one idiot can win it all.”

The contest finally ends when cops show up and “arrest” the two idiots.

While starting with a muscle-car roar, Jay Leno’s Garage should prove to be as eclectic as his own vast car collection, and promises to appeal to gearheads of all stripes, as did the YouTube series. And unlike most of the reality-show car programs that drift on and off of cable TV, Leno’s latest should be well worth watching, if the premiere is any indication.