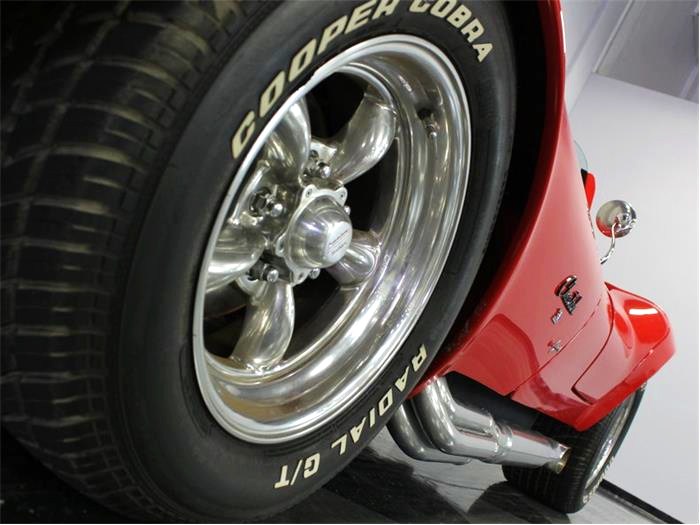 No Chevy fan would ever mistake this Cheetah replica for the real thing, since there were no roadster versions of the radical sports coupes designed and built in the 1960s by racer Bill Thomas to compete against the Ford-powered Shelby Cobras. Only 19 Chevy V8-powered Cheetahs were reputably created during their 1963-66 run, with about 100 continuation models coming later.

The Pick of the Week is advertised as a 1964 Chevrolet Cheetah replica roadster, newly constructed with just 12 test miles, built from a body and rolling-chassis kit produced by the well-known replica-car company Shell Valley Classics of Platte Center, Nebraska. Not sure why it is considered a ’64 model other than designating the era of the originals.

As the Fort Worth, Texas, dealer listing the Cheetah on ClassicCars.com notes, modern replicas of the close-cropped performance Chevy are quite rare, especially compared with the proliferation of latter-day Cobras – owners of actual, original ’60s Cobras are often miffed by people who assume that their cars are replicas.

The short wheelbase and truncated rear deck are Cheetah hallmarks

“Beautifully built, insanely fast and just finished, this is an awesome car in the Cobra mold but tuned for guys who prefer bow ties,” the dealer says in the extensive description. “This car is purity of design, distilled down to its essence.”

Like the original Cheetahs, the replica is a strange little beast with the V8 engine set so far back in the chassis that there is no drive shaft, just a universal joint linking the transmission to the rear. The headers wrap around the footwells and the left rear tire is just aft of the driver’s elbow.

The cockpits of the original Cheetahs were notoriously cramped and hot, and the dealer notes that the lack of a roof makes the replica roadster more agreeable to drive in the open air, which is the only way to drive it since it has no top.

Here’s more from the dealer’s description:

“The Shell Valley Classics fiberglass body’s shape is faithful to the original, with a minimalist design stretched tight over the tube-frame chassis without an extra ounce of fat anywhere to be found. The swoopy front end is as handsome as ever and the abruptly cut-off rear end is as much dune buggy as track weapon. Laid up in fiberglass, just like the originals, it is probably a lot nicer than anything built in the ’60s, and the Porsche Guards Red paint has a deep gloss that you’d never find on a track car.

With its 350 cid V8, the Cheetah has a tremendous power-to-weight ratio

“Fit and finish are quite good and you can tell that a lot of time went into getting the details right, including how neatly the hood fits around the engine’s air cleaner, the small signal lights integrated into the grille opening, and the clean way the rear license plate frame is molded into the bodywork. Someone was sweating the details here.”

“With less than 2,000 pounds to pull around, the 350-cubic-inch Chevy crate motor under the hood doesn’t have to work very hard to make explosive performance numbers,” the dealer wrote. “The engine is backed by a five-speed manual gearbox feeding a Ford 9-inch rear full of 3.70 gears, so you’d better hang on tight when you crack the throttle.”

Sounds pretty exciting, and for those brave enough to blast around in this little tornado, there’s not much likelihood of encountering another Cheetah roadster on the road, track or local car show. Priced at $62,995, the roadster would definitely set you apart from the crowd of Cobras, which seem downright staid compared with these wild wheels.