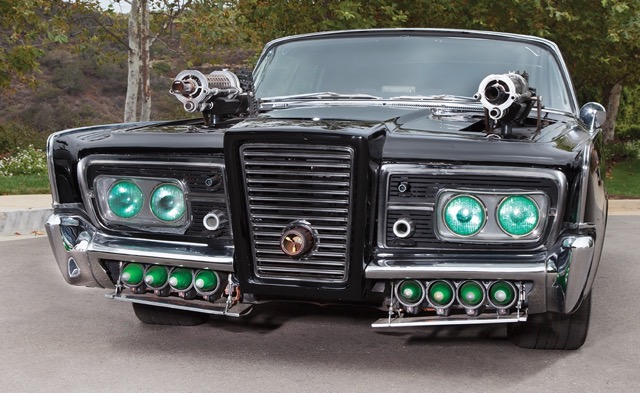 ‘Steve’s” 1958 Chevrolet Impala from American Graffiti, Fonzie’s Triumph motorcycle, The Green Hornet’s “Black Beauty,” Evel Knievel’s “Stratocycle” and a “screen-used” General Lee Dodge Charger are among the vehicles that will cross the block this coming weekend at Profiles in History’s Hollywood Auction 74.

“Each of these vehicles are symbolic of the films and television shows in which they were featured, pervading popular culture—several being made into toys and lunch boxes,” Joe Maddalena, president and chief executive of Profiles in History, said in a news release. “You couldn’t ask for a greater showing of important vehicles in a single sale.”

Maddalena founded the auction house in 1985. The company claims to be the world’s largest auctioneer and dealer of Hollywood memorabilia, including autographs, letters, documents, photographs and scripts.

The catalog for Hollywood Auction 74 runs 680 pages and includes all sorts of movie and television memorabilia as well as a few vehicles that range from models used for special effects to those listed above.

The star among the vehicles is Lot 1531, the ’68 Impala that Steve Bolander (Ron Howard) loaned to Terry “The Toad” (Charles Martin Smith).

The Toad “was a Vespa kind of guy until his friend Steve Bolander hands over the keys to his ’58 Impala,” the auction catalog notes. “embarking Toad on an evening of personal amusement joined by Debbie Dunham (played by the film’s Academy Award-nominated Candy Clark) fulfilling all of his dreams resulting in some of most noteworthy moments in the film. The Impala exemplified new possibilities.”

The car was purchased through an ad posted in The San Francisco Chronicle by George Lucas’ transportation captain Henry Travers after filming and is being offered for sale for the first time since. It still wears its white paint with red-and-white tuck-and-roll upholstery and original wheels. A Turbo 400 automatic transmission has been installed, but the original three-speed Saginaw manual used in the film comes with the car.

Lot 1065 is a 1949 Triumph Trophy 500 Custom motorcycle, one of three used by Henry Winkler in the 10-year run of the Happy Days television show. The catalog notes that the other two “went missing/stolen, or raced to the ground and sold for parts.”

Lot 1374 is the Harley-Davidson XLCH 1000 Eagle bike Knievel used in the movie, Viva Knievel! to rescue Gene Kelly from a mental hospital. It has a futuristic fiberglass fairing with integral wings. The pre-auction estimated value of the Knievel motorcycle is $200,000 to $300,000 while Fonzie’s Triumph is expected to bring $100,000 to $150,000.

Lot 1074 is a 1969 Dodge Charger “General Lee,” one of more than 300 used in filming of The Dukes of Hazzard television series.

“Only a few survived the production, as most were destroyed during filming of the show’s obligatory stunt scenes,” according to the auction catalog. “So many cars were destroyed, in fact, that the production crew had difficulty finding similar Dodge Chargers, scouring the country for vehicles that they would quickly convert to new “General Lees” for the stunt scenes.

“This car has all the hallmarks of a studio ‘hero’ car: the inside door panel hardware (door lock and handles) were removed by the production crew to enable the actors to easily slide in and out of the car through the door windows, and a custom front center seat was installed so that an additional actor could ride in the front.

“The car was originally blue, and the interior of the trunk and engine compartment still retains this color scheme, as this car was most certainly acquired by the crew in some of the later seasons and painted in the ‘General Lee’ paint scheme.” That paint includes the now-controversial Confederate flag on the car’s roof.

The catalog says that while the turn signals do not work, “the car remains in good running condition and is completely street legal and drivable.” It is expected to sell for between $100,000 and $150,000.

Lot 1813 is the 1965 Chrysler Imperial modified into the Black Beauty for the 2011 movie, The Green Hornet. Lot 1875 is Led Zeppelin drummer John Bonham’s custom Triumph “Sunset Tripper” chopper from the documentary film, The Song Remains the Same.

The auction begins today in Calabasas, California, with the vehicles on the block Thursday, the last of the three-day sale.