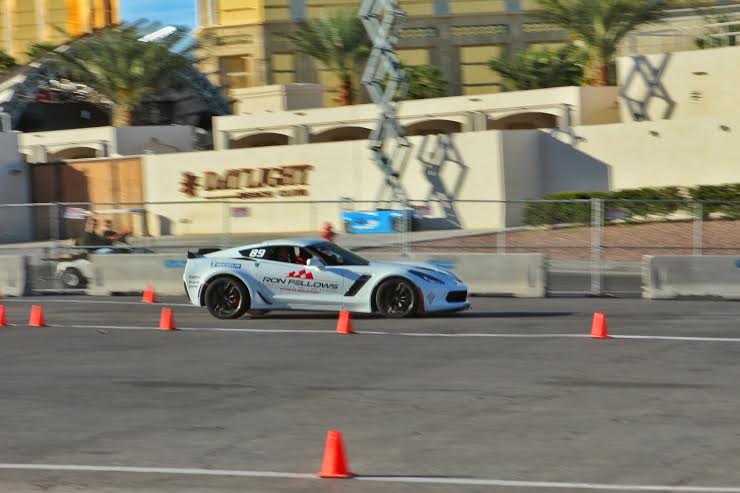 While Barrett-Jackson is primarily known for auctioning classic and collector vehicles, a fun attraction offered away from the bidding block is a ride and drive experience hosted by various automotive manufacturers. Friday in Las Vegas at the Mandalay Bay Events Center, I had the opportunity to do test drives  in  the  2015 Ford Ecoboost Mustang and V6-powered Chevrolet Camaro and go for rides in a 2015 Ford Mustang V8, 2015 Chevrolet Corvette Z06, 2015 Dodge Viper and a 2015 Dodge Challenger Hellcat.

The 2015 Ecoboost Mustang is fun. I was limited to a speed of 25 miles per hour, but could tell it’s the perfect vehicle for someone who wants to look cool and own a new muscle car yet needs good gas mileage for commutes. But after my short drive around the four-corner track I wanted more power.

Satisfaction came in the form of the V8 Mustang as the expert driver expertly navigated the course at high speeds, making the Ecoboost seem slow and sluggish. In comparison, the V8 is a powerhouse and delivers a thrilling ride, however, the car has a lot of lift in the acceleration and a tendency to nose dive when braking hard, things   you don’t notice in the Ecoboosted version

Next I took a spin as a passenger in the 2015 Dodge Viper, which got my blood pumping. Not only is it a beautiful car, but truly a racecar. It features side exhaust and minimal interior luxuries. The styling is retro,  similar to the 1990s models that first got our attention. While in the car, the rear end kept coming out in the turns, causing the car to drift. At the end of the drive I felt exhilarated and wanted more, it’s a car I would love to take from the street to the track and keep on the track. But the Viper may be a little too radical for consistent daily street use.

After my thrilling ride in the Viper, I rode in a new 2015 Challenger Hellcat. I have to say, I was disappointed. The car felt huge and it’s clearly not made for cornering. Although the Hellcat seems made for drag racing,  it did not feel like 700 horsepower pushing me back into the seat.

Next came the Camaro and,  at stock ride height, I felt like I was in a truck. The Camaro handled well but also suffered the same lift and nose dive as the Mustang did. I enjoyed the heads up display and the comfortable interior.

My last experience for the day was a 2016 Z06 Corvette. The Corvette held every corner and took the track with grace, making the Viper feel out of control in comparison. The interior was comfortable and overall it was a  fun drive.

The Corvette seemed to be a great car for daily use that you could also take to the track.

Footnote: Dodge was by far the most popular destination for Barrett-Jackson visitors with a waiting line longer than Chevy and Ford combined.