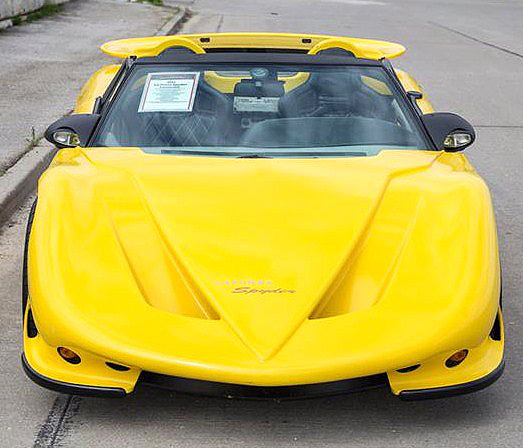 For those who hanker for a swoopy exotic sports car but can’t come up with the six-figure price tag, here’s something completely different that could scratch that itch.

The Pick of the Day is a 2002 La Forza Spyder, essentially a fiberglass mid-engine car hand-built on a tube-frame chassis and powered by a Cadillac Northstar V8. Weird but interesting.

This Pick might be a reach since I’ve never heard of the La Forza (not to be confused with the Laforza luxury SUV of the 1980s, or the Verdi opera, La Forza del Destino) and I couldn’t find any pertinent information via Google. Even the seller, a car dealer in St. Charles, Missouri, seems confused; the headline of the listing on ClassicCars.com calls the car a “2002 Unspecified, Unspecified.”

With just 31,289 miles showing on the odometer, the La Forza is ready to roll, the dealer says. The asking price seems about right at just $29,995 for what the dealer says is a one-of-a-kind sports car that took five years to build. The photos show an apparently well-finished interior, and the under-hood shots look clean.

The mid-engine styling is kind of cool-looking in the photos, aside from that gigantic wing on its tail that looks more like a picnic table than an air foil. Good thing a backup camera is included.

One critical question: does this thing have headlights? Oh wait, that must be them integrated with the rearview mirrors. As I said, weird.

But as the seller notes, the La Forza should be a real head turner “that will draw more attention than you could ever ask for.” Just have a good explanation ready when folks wander over and ask, “What is it?”