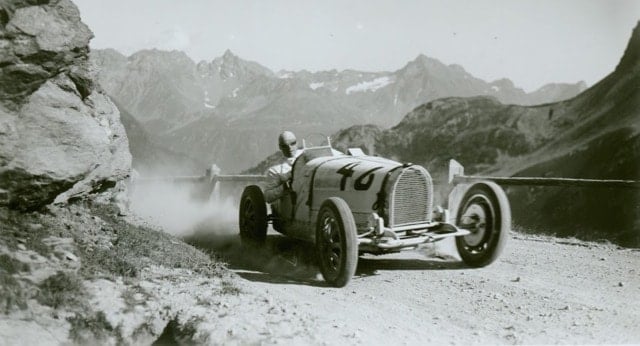 The first St. Moritz Automobile Week was organized in 1929 as a way to attract tourists to the winter resort during the summer season. Highlights included the Bernina Mountain Race, a hillclimb for Grand Prix racers, and the “Kilomtre Ianc,” an acceleration race over a one-kilometer stretch of road specially paved by Shell, the oil company.

On October 2-4, the Bernina Granturismo hillclimb will celebrate such events with classic cars challenging the Bernina Pass in the Swiss Alps.

“As a company we relish the challenges of historic racing, be it at the Nurburgring or at Silverstone, but the Bernina Granturismo really represents something different,” Derek Hood, managing director of JD Classics, said in a news release. The British restoration facility and classic car dealership will be title sponsor of the 5.6-kilometer climb on closed roads between La Rosa and the Bernina Hospiz.

“Racing against the clock on beautiful, winding Swiss Alpine roads is something that myself and the team are really looking forward to,” Hood added.

JD Classics will enter a C-type Jaguar, Cooper T33, Datsun 240Z and ex-works Ford Escort RS1800 in the hillclimb, which is open to cars built until the early 1980s.

Winners of the original Bernina Mountain Race included Hans Stuck in an Austro-Daimler ADR 3.0 in 1929 and Louis Chiron in a Bugatti T47 in 1930.