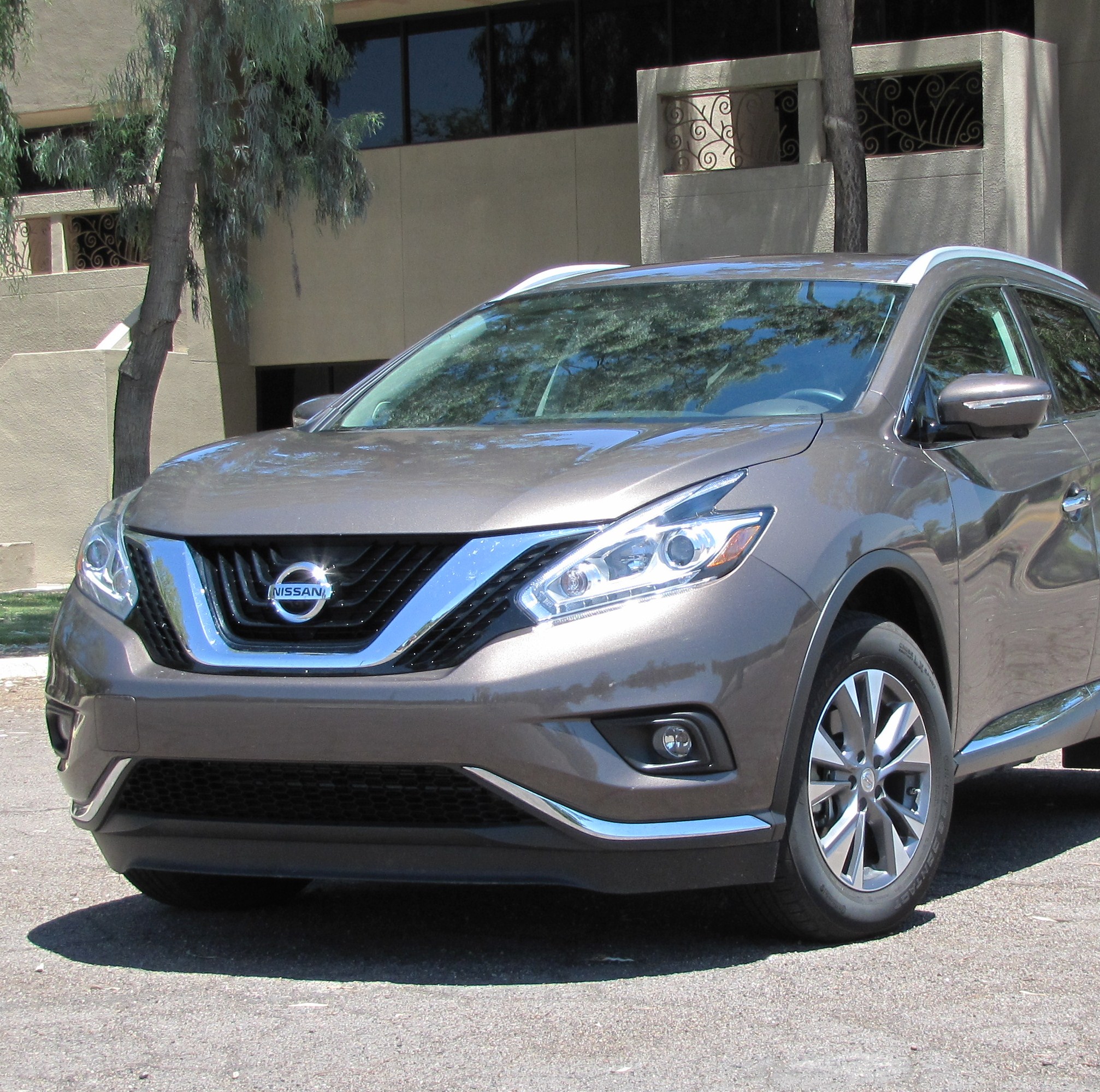 My first glimpse of the all-new 2015 Nissan Murano revealed what seemed to be a deep and rather extreme contour in the sheet metal just ahead of the rear wheel. From a distance, it looked like the body pushed in more than six inches, creating a narrow waist more akin to an exotic sports car than a family crossover.

But as I came closer, the contour flattened out into a shallow depression, and I realized that the effect was actually an optical illusion created by the shape of the lower trim that made the styling look so radical. I was impressed.

The avant garde styling of the 2015 Murano certainly sets it apart, an amalgam of complex curves and highlights, including a “floating” roofline (also an optical illusion), boomerang-shaped headlights and taillights, and a pair of what can only be described as vestigial tailfins rising high alongside the rearmost windows. The fins are outlined in chrome, which made me recall another evocatively styled vehicle from the past: the Cadillac Eldorado of the late 1950s.

What’s cool is that the 2015 Murano appears to come directly from the Nissan concept car shown last year at the New York Auto Show, not subdued nor watered down from the designers’ ideal. Nissan has a long history of pushing the envelope in vehicle styling, even extending to its Quest minivan, which possibly has something to do with the Japanese company’s connection with innovative French automaker Renault.

And while the latest Murano’s design seems to be a love-it-or-hate-it situation, it does carry on Nissan’s plotline for its midsize crossover. Murano has been a glowing success story for Nissan from the beginning, its distinctive styling separating it from the crowd while still providing the roomy wagon capabilities of its popular class. Murano was a departure from the norm since its introduction, with styling that started out daring and now, in its third generation, continues to polarize.

There can be no controversy about the resulting aerodynamics, however, with a drag coefficient of just 0.31, which puts the high-profile crossover in the range of swoopy sports cars.

But I did discover a clinker in the styling: the reverse curve at the rear of the hood, which at certain angles can reflect glare from the sun directly into the driver’s vision. Not a good effect at all.

The premium interior is attractive and highly functional | Nissan

While its exterior design seems radical, Murano’s interior and driving attributes are relatively conventional. The comfortable and well-equipped interior was appreciated during a lengthy road trip through Arizona and New Mexico; the “zero-gravity” seats derived from the NASA space program, as Nissan describes them, are very supportive. Although I was disappointed that I wasn’t floating a couple of inches above the surface like an astronaut in space. Oh, well.

The premium interior in the Murano SL we tested seemed richly furnished for its price point with attractive modernistic styling, which Nissan says in its literature “offers an engaging social lounge feel.” Just about every desirable comfort and convenience feature was on board, including a nine-speaker Bose audio system and an 8-inch video screen with voice recognition for navigation and audio control. Everything was easy to use and worked well, and the system provided plenty of helpful information during our vacation trek.

Power is provided by the automaker’s all-purpose workhorse 3.5-liter V6, which in some variation can be found in everything from Nissan sports cars to pickup trucks. The tried-and-true engine is quiet and refined, though some drivers might appreciate a bit more than 260 horsepower for this nearly 4,000-pound vehicle.

Murano does have a continuously variable automatic transmission rather than multiple gears, a feature being implemented more often by automakers trying to squeeze the most fuel mileage out of their vehicles. Like most driving enthusiasts, I’m not too crazy about these loopy, droning transmissions.

The “floating” roofline is accomplished via black panels | Bob Golfen

But once again, Nissan shows its mastery of the technology with unobtrusive performance plus a manual gear selector that does a good job of selecting and holding faux gear ratios. In other words, it didn’t annoy me or negate from the drivability of the Murano.

Full mileage during our road trip averaged around 26 mpg, according to the on-board computer, an improvement over past Muranos no doubt aided by the more-slippery aerodynamics.

Typical of this crossover class, the Murano has a softly cushioned ride with a relaxed demeanor, and it cruises competently at high speeds. Multiple hours of driving never felt tiring or uncomfortable. The steering is a bit light and twitchy at highway speeds, though, which also is typical for this type of vehicle. On a winding mountain road, Murano’s handling proved surprisingly agile for such a tall and beefy wagon.

Electronic safety features abound, including forward emergency braking and collision warning, blind-spot warning so you don’t switch lanes at the wrong moment, cross-traffic alert, moving-object detection and a rear-view camera so you don’t back into anything; the surround-view cameras that provide what looks like an aerial view of the Murano is an awesome feature.

The front-wheel-drive Murano SL we tested is certainly not inexpensive at just under $38,000 but very competitive when compared with the offerings from the luxury brands. There are eight front- and all-wheel-drive Murano models, with the base S starting at just over $30,000. The test SL is set just below the top Platinum version, which starts at around $40,000. Add about $1,600 to each model for all-wheel drive.