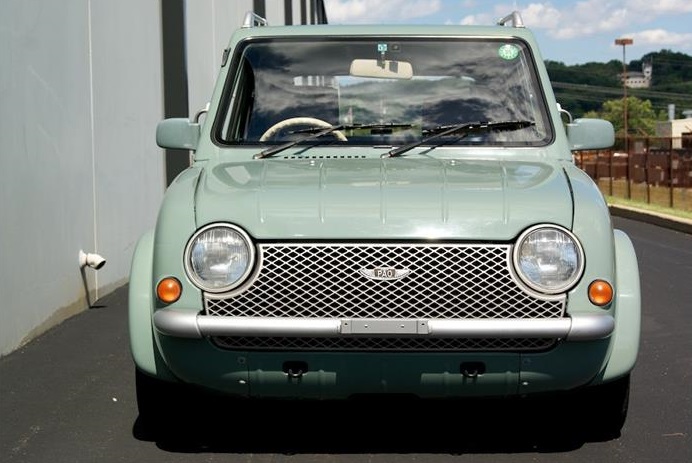 Nissan launched the retro-style Pao in 1989 at the Tokyo Motor Show as an economical city car that could cruise “with speed and agility” while giving drivers a unique vehicle with plenty of vintage-looking character. This quirky combination of performance and style makes this 1989 Nissan Pao our Pick of the Day.

According to the listing on ClassicCars.com, the Pao quickly became popular and was sold on a first-come-first-serve basis in Japan before it sold out within three months. The Pao is one of the rarest Nissan models and highly sought-after by Japanese-car enthusiasts.

Since the Pao was sold only in Japan, it was produced only with right-hand drive, as this example shows.  Coincidently, this is the second day in a row that the Pick of the Day is a right hooker; yesterday’s Pick was a vintage Aston Martin V8.

“Painted in Aqua Gray, this Pao is a rare sight in the United States as it was only ever sold in Japan. It was intended for city use in Japan’s crowded cities,” the seller says in the listing. “And due to its size, the Pao makes even the smallest parking spot viable.”

According to the listing, this particular car has excellent exterior paint and “body panels are in great condition, only showing minor imperfections.”

“The interior is spacious given the initial exterior impression,” the seller adds. “The interior headliner and dash surfaces are painted to match the exterior body color. The look is complete with tan vintage-style cloth seats along with unique woven seatback storage pouches.”

The car was imported by a lifelong Japanese car collector and has already undergone importation and titling process, according to the listing, and is sold as mileage exempt on a clear Maryland title. The odometer currently reads 168,612 km which converts to 104,770 miles. The Pao is being offered by a dealer in Fenton, Missouri for $18,900.