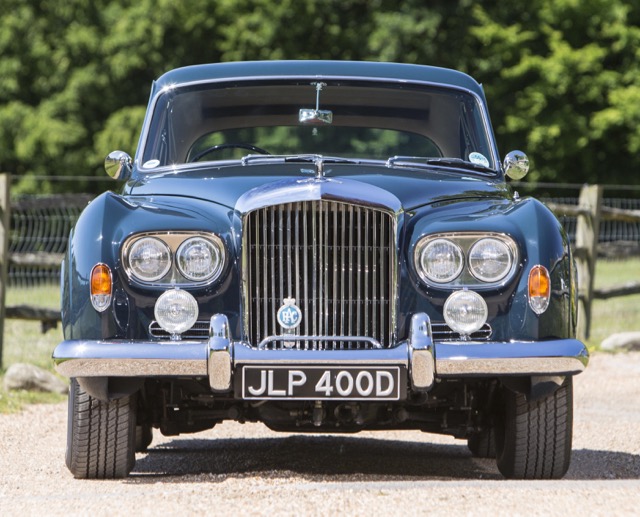 Aston Martins did very well at Bonhams’ Goodwood Revival auction last weekend. So did Scarab racing team vehicles, a car with rock ’n’ roll history, and even a couple of re-creation cars. On the other hand, only half of new Top Gear host Chris Evans’ 12-car consignment went to new owners.

Third-highest sale was the ex-Keith Richards “Blue Lena,” the 1965 Bentley S3 Continental Flying Spur that took the Rolling Stones performer on what he has termed “many an acid-fueled journey,” including one particularly notable drive from England to Marrakech with model Anita Pallenberg. The car sold for $1,175,917.

Three cars and a racing car transporter from American Lance Reventlow’s Scarab racing team were offered up for bidding. A 1960 Offenhauser-powered Grand Prix racer and the team’s iconic 1956 Fiat-Bartoletti transporter each brought more than $1 million. The Scarab-Offy was driven by Reventlow and Chuck Daigh. Another 1960 Offy-powered Scarab single-seater racing car, a “re-assembly of chassis 002 which was severely damaged at Silverstone in 1961,” Bonhams catalog said, sold for $506,271.

Meanwhile, a reproduction of a 1958 Chevrolet-powered Scarab Mark I sports racer (two-seater) did not sell during the auction but was purchased after the auction for what Bonhams said was more than $1 million.

Meanwhile, Evans’ personal automobilia brought more than $101,000 that he will donate to the BBC charity Children in Need. However, six of the 12 cars he was trying to sell did not sell, including an alloy-bodied 1966 Ferrari 275 GT4/6, a 1963 Ferrari 250 GT “Lusso,” and a replica of the Chitty Chitty Bang Bang movie car.

Bonhams next sale is September 26 with the auction of the Frederiksen Collection at Lyngbaekgaard Manor in Denmark.