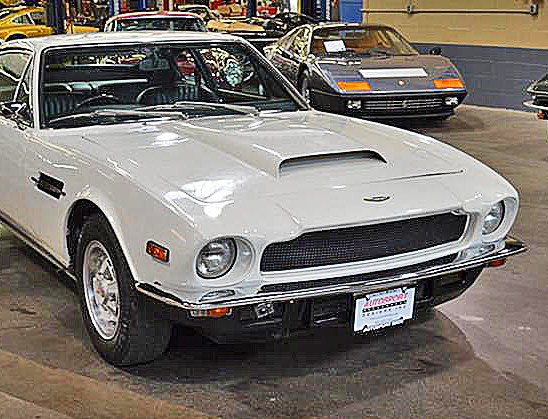 Aston Martin. No other sports-car marque has a richer history or mythology than Aston. Old or new, the cars from Newport Pagnell have special magic about them. The older cars personify the idea of the bespoke GT car, and it is no wonder that Ian Fleming chose the Aston Martin for the legendary secret agent James Bond.

Speaking of James Bond, the Aston model we are featuring as our ClassicCars.com Pick of the day is an example of a model that Bond used in the 1987 film The Living Daylights: a 1974 Aston Martin V8 coupe located in Huntington Station, New York.

We apologize in advance that this car does not have stinger missiles or rocket-propelled ski-package options, but it is a very nice Aston Martin V8 coupe at a very fair price.

Derived from the DBS, the V8 Coupe is an upgrade of that model with the additions of a few more modern amenities and a fantastic four-4 cam V8 engine. In addition, this example has the very desirable 5-speed manual gearbox. It is a right-hand-drive example, but we have found that driving a right hand drive car in the U.S. is easier to get used to than one might think.

These Aston Martin V8 cars have gone up in value quite a lot in the past five years and we anticipate this one following that trend. Beside the potential increase in value, there is a sense of occasion when driving an Aston Martin that is not equaled by any other sports or GT car.

This car has a white exterior with black leather interior, and it has traveled just 89,000 miles since new, according to the seller, who also notes that it received an engine rebuild 2,500 miles ago after being completely restored in 1984. During the restoration, all glass and trim were removed and the car was chemically stripped before being treated to a bare-metal respray, which included new rubber seals everywhere and an engine and transmission rebuild.

The seller notes that the car has a few needs as it has spent a great deal of its life in storage; most importantly its front brake calipers must be rebuilt. Most recently, it has received a new clutch kit, rebuilt clutch slave and master cylinders, brake lines replaced, rebuilt brake master cylinder and rear brake calipers.

The 1974 Aston Martin is offered by an Aston specialty dealer for a reasonable $89,500.