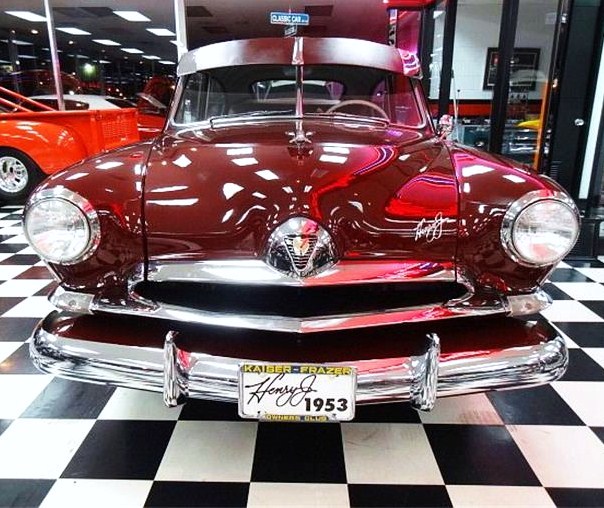 The Pick of the Day is a genuine rarity for two reasons: 1) They only made 8,100 of them and few have survived, and 2) Many of them were built into hot-rod dragsters back in the day.

But this 1953 Allstate Henry J Corsair Deluxe has not only survived, it is apparently in good, low-mileage condition just as it might have been driven when new, including a funky period-authentic sun visor above the windshield.

These small cars – the wheelbase was just 100 inches – were built by Kaiser-Frazer, which was renamed Kaiser Motors in 1952, and they were sold by Sears Roebuck under the department-store chain’s Allstate brand. Advertised by Sears at the time as the lowest-priced family sedan in the U.S., the Allstate Henry J was actually somewhat upscale compared with Kaiser’s own version of the Henry J, with more features and better trim. The joint venture lasted only a few years.

In the 1950s and ’60s, Henry Js were commonly used as the basis for lightweight drag-racing machines, often seen at the strip with huge supercharged V8s packed under their hoods. This car not only escaped that fate, it is presented by the Bonner Springs, Kansas, classic car dealer as a well-equipped survivor that retains its desirable Allstate upgrades. There is no mention in the ad as to whether the car has been repainted or restored.

The Henry J looks clean and original in the photos, although there are no under-hood shots, and the mileage on the odometer reads 42,611. The 80-horse flathead six, which was the bigger engine offered, should be plenty to motivate this small car, and it would be a fun and eye-catching entry for a classic car rally.

While the asking price for the Henry J seems strong at $29,900, any potential buyer could reasonably justify the expense for two reasons: 1) Its condition appears to be excellent, and 2) Try and find another.