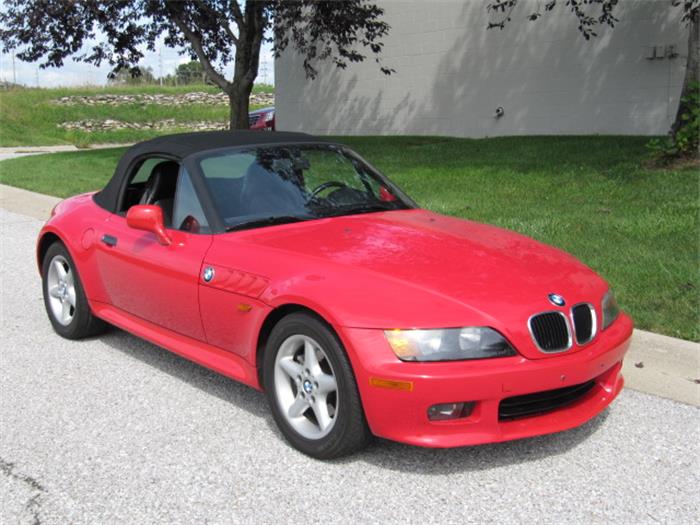 1997 BMW Z3 listed on ClassicCars.com by a dealer in Omaha, Nebraska.

The Mazda Miata took over the early ’90’s as a moderately priced two-seater sports car and had huge success in the U.S. So much so that other automakers were quick to respond with their own versions of the two-seater roadster. BMW developed the Z3 to satisfy the demand, and the cars were produced from 1996 through 2002.

The BMW Z3 is widely accepted as a combination of retro appeal and modern performance, securing it as a future classic and our Pick of the Day. Prior to its debut, the Z3 appeared in Goldeneye, a James Bond film that led to more than 15,000 of the roadsters sold before the car was even available, as the movie sat at number one in the box office for several weeks.

This BMW Z3 is in excellent original condition after only 42,000 miles of driving and is all-original.

The 2.8 liter inline-six is featured in this 1997 BMW Z3 listed on ClassicCars.com by a dealer in Omaha, Nebraska.

According to the listing, this BMW Z3 is in excellent original condition after only 42,000 miles of driving and is all-original. The car has a manual transmission and features cruise control, power brakes, power locks, power and heated leather seats, power steering and power windows. ABS and traction control complete the luxury sport coupe.

The car comes with six high-performance audio speakers hooked up with a 120-watt amplifier and Dolby C stereo system. Halogen headlights and fog lights help give the Z3 its classic look.

According to the listing, this car also comes with a clean Carfax, but is in need of new tires and some service.