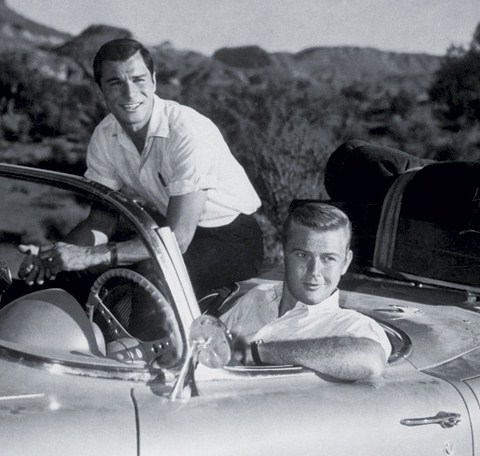 Martin Milner, who played Tod Stiles in the 1960s TV drama “Route 66” and helped raise the Mother Road to iconic status, died Sunday at 83 of heart failure at his home in Carlsbad, California.

Milner’s career was launched behind the wheel of the Chevrolet Corvette in which he and his traveling buddy, Buz Murdock, played by George Maharis, drove across the western United States in search of adventure, which they inevitably found each week.

The show played from 1960 through 1964 and was shot entirely on locations all over the country. A movie remake of “Route 66” is reportedly in the works.

The stylish “Route 66” also served to put the rural highway and Chevy Corvette on the map for millions of Americans while taking up many social issues of the day. In every program, the handsome Corvette roadster appeared front and center, no doubt helping to boost recognition and sales for Chevrolet.

Before the TV show, most people associated Route 66 with the western migration of hordes of people to California during the 1930s Dust Bowl era, immortalized in John Steinbeck’s Grapes of Wrath, or else the 1940s pop song “Get Your Kicks on Route 66.” The TV show helped change the perception of the famed highway, imbuing it with glamour and a spirit of adventure.

Part of the credit for the show’s basic plot line of two rootless buddies and their endless wanderlust can be traced to Jack Kerouac and his landmark book On the Road, which inspired a generation to shuck the bounds of convention and head out to search for freedom and self discovery. Beatniks, hippies and motorcycle gangs all find common ground on the highway, and while the adventures of Buz and Tod were far less radical, they were nonetheless part of the foundation .

The image of Route 66 has become powerfully connected with the collector-car culture, especially among those who favor post-war American iron, hot rods and custom cars. Pilgrimages to drive on the surviving segments of the highway are popular outings for car clubs and rallies, and the Route 66 highway marker sign – reproduced millions of times – immediately conjures up impressions of driving great old cars on the open road.

There is a nostalgic flavor of longing for a time before modern interstates rolled past old Route 66, and the small towns along the way dried up as traveling folks no longer stopped off for a piece of pie and a homespun place to stay overnight. Pixar’s landmark animated film Cars dwells on that theme, so that even those far too young to remember the heyday of cross-country blacktops could relate to that sense of loss.

Before landing his part as Tod in “Route 66,” Milner played minor roles in films and early TV shows, including “Dragnet” and “The Lone Ranger.” Afterward, he went on to play his popular role as Officer Pete Malloy in “Adam-12,” as well as making guest appearances in a number of subsequent TV shows. His clean-cut looks and earnest expression made him a natural as a good-guy protagonist.

Just recently, a dusty drive across central California with a buddy on less-traveled back roads – not in a vintage Corvette, unfortunately, but a modern SUV – rekindled some of that sense of windswept freedom away from the crowded interstate and the pressure of high-speed driving.

We cruised through small towns and past local landmarks, and visited a shrine-like homage to the late James Dean. Sadly, Buz and Tod were nowhere in sight.