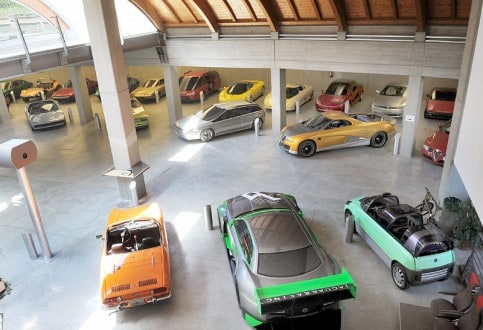 Yes, that list reads like a Who’s Who or an all-star team of European automotive designers of the 20th Century. What they have in common is that each worked with or for Nuccio Bertone, whose genius wasn’t in designing cars but in identifying talented young stylists and letting their genius develop in the studios of Carrozzeria and later Stile Bertone.

And now many of their creations, cars from Bertone’s own collection, cars declared an Italian national treasure, are going to a bankruptcy auction.

From amazing concepts to beautiful vehicles for series production, Bertone, launched by Nuccio’s father in 1912 and led through its post-war glory years by Nuccio, was at the pinnacle of Italian automotive design.

Nuccio was in his early 80s when he died in 1997. He made his two-decades-younger wife promise that after his death she would keep the company going long enough to have a centennial anniversary.

Stile Bertone had its anniversary, but it did not flourish without Nuccio. There were periodic rallies that produced cutting-edge concept vehicles, but the Bertone business group entered bankruptcy proceedings in 2014. And now, beginning September 14, the company’s name and what remains of its car collection are to be sold at an online auction that will run for two weeks.

“This collection represents an important piece of the car design history,” carbodydesign.com said in reporting on the upcoming auction. “We hope that the collection is going to be acquired by someone who is not just interested in a financial investment, but also willing to restore and maintain it and – possibly – display it to the public.”

For many years, the collection has been on display only to visitors to Stile Bertone’s studios tucked into the Valle di Susa at the foot of a Piedmont mountain west of Turin in the village of Caprie. I’m among those fortunate enough to have toured the collection when it was intact and I was working on the Masters of Car Design book.

It was “intact” because six concepts from the collection — the Lamborghini Marzal, Lancia Stratos HF Zero, Chevrolet Testudo, Lamborghini Bravo and Athlon and Lancia Sibilo — are owned by Nuccio’s widow; two of them were sold earlier this year at RM Sotheby’s auction at Lake Como.

The remaining 76 vehicles have been declared an Italian national treasure and will be sold at the online auction as a single lot with a surprisingly low minimum opening bid of €1.5 million ($1.7 million). As a national treasure, the cars are required to stay together and to stay within the borders of Italy.

Also being sold are rights to the Bertone name and trademark. The opening bid for those rights is €3 million ($3.4 million).

The auctions run until 3 p.m. (Italian time) on September 28. For more information (albeit in Italian), see the websites established for the Bertone name and car collection auctions.