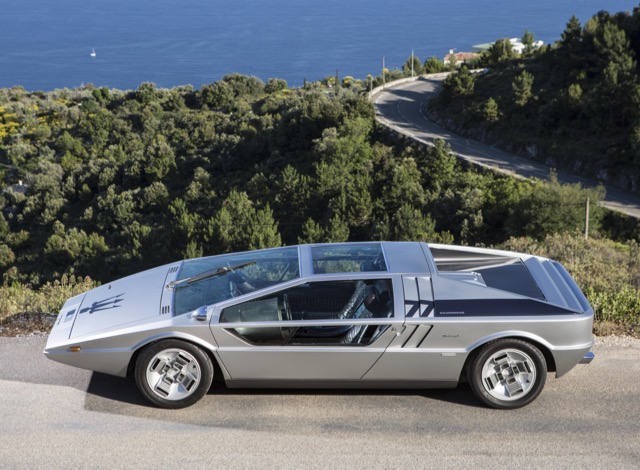 With the 1972 Maserati Boomerang concept car selling for $3.7 million, Bonhams’ inaugural Chantilly auction, held in conjunction with the Chatilly Arts & Elegance concours in France, produced $7.5 million Saturday for the sale of 28 cars.

“For a sale just in its first year, the Bonhams Chantilly Sale has achieved an excellent result,” Philip Kantor, Bonhams European head of motorcars, said in a news release. “Our first black-tie evening sale, the event was an elegant celebration of beautiful and rare motor cars, one that we hope to continue for years to come.”

The unique Maserati Boomerang was arguably the signature concept car of the 1970s.

“Designer Giorgetto Giugiaro used geometric shapes and ruler-straight lines to create its angular appeal, ensuring the unusual Boomerang emerged from the decade to be one of the great style influences of the motoring industry,” Bonhams said in its news release.

Another Maserati, a 1968 Mexico 4.7-liter coupe, was the second-highest sale of the evening, bringing $691,669. The Mexico was so named in honor of a victory in the 1966 Mexican Grand Prix by a Maserati-powered Cooper. The Maserati Mexico sold at Chantilly was one of only three Frua-bodied examples, and it won best of show honors at Maserati’s 100th anniversary celebration.

Eight cars from the collection of French businessman and art collector Alain Dominique Perrin were included in the sale. The most notable was a 1977 Mercedes 450 SEL 6.9 originally owned by French singer-composer Claude François.

CloClo to his fans, Francois wrote the song My Way, later made globally famous by Frank Sinatra. The SEL sold for $102,469.

“This auction is a welcome addition to our series of blue ribbon sales” James Knight, Bonhams Group Motoring Director, said in the news release. “We look forward to our sale at the Goodwood Revival next week and the very special single-owner sale in Denmark later this month.”

Held on the grounds of Château de Chantilly, the Arts & Elegance event drew some 10,000 people who saw the Concours d’Elegance for modern concept cars and a superb Concours d’Etat for classic cars. The second-year event also included fine art exhibitions, fashion shows, live music and lifestyle exhibits, all on the grounds of the château.