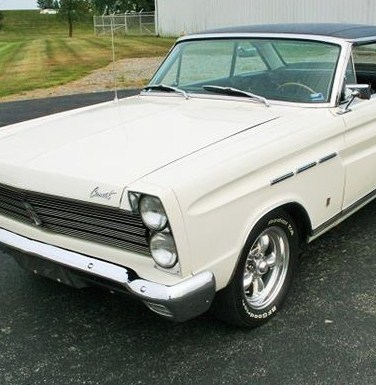 You gotta love sleepers. This 1965 Mercury Comet Caliente hardtop might not technically be called a sleeper since it is a high-performance version of the midsize Mercury of the era, but this one has been upgraded with a 347 cid “stroker” V8 that should startle stoplight challengers.

The Bloomington, Illinois, dealer advertising the Pick of the Day on ClassicCars.com says in the very brief description that the Comet has had a “stroker” transplant with a recently rebuilt engine that enlarged a Ford 302 cid small block to 347 cid, with a corresponding boost in performance.

So what is a stroker? You hot rodders out there know what that means, but for the uninitiated, it refers to an engine that has been given a longer stroke by means of an altered crankshaft and other engine components in a technically challenging conversion. A longer stroke equates to higher air volume (347 overall displacement instead of 302) and typically higher compression.

Advertisements online for engine builders who perform this kind of alteration using performance parts say they get well over 400 horsepower out of a stroked 347. The seller of this car does not provide any details of the build, but the additional power and torque must do a lot to motivate this light car, which in stock trim weights around 3,000 pounds. So it should be a hot Caliente.

The description notes that the engine is dressed with an aluminum intake, new carburetors and headers, and the under-hood photo shows extra bracing applied to the front superstructure. The engine is hooked up with an automatic, again no details given, which is not ideal compared with stick shift but OK in this case if the transmission is up to the challenge.

But beyond performance, the Comet is a sharp-looking car that sports classic alloy wheels and dual exhaust pipes. This was a great styling era for Ford, and the stacked headlights and trim hardtop roofline look sporty and purposeful. I like the white paint that shows off the details of the body, capped with the black vinyl top.

From the photos, it seems like a clean build all around, and the interior looks very well-preserved as original. The dealer describes the body and interior as being in “excellent” condition and that that car is “rust free” and “drives great.”

The price sounds right at $19,500 for a cool-looking Comet that would be usable, show-able and no doubt quick. And to all those Mopar guys who brag, “I gotta Hemi,” you could smirk and replay, “So what? I gotta stroker.”