Artist known for Goodwood sculptures does one for Porscheplatz 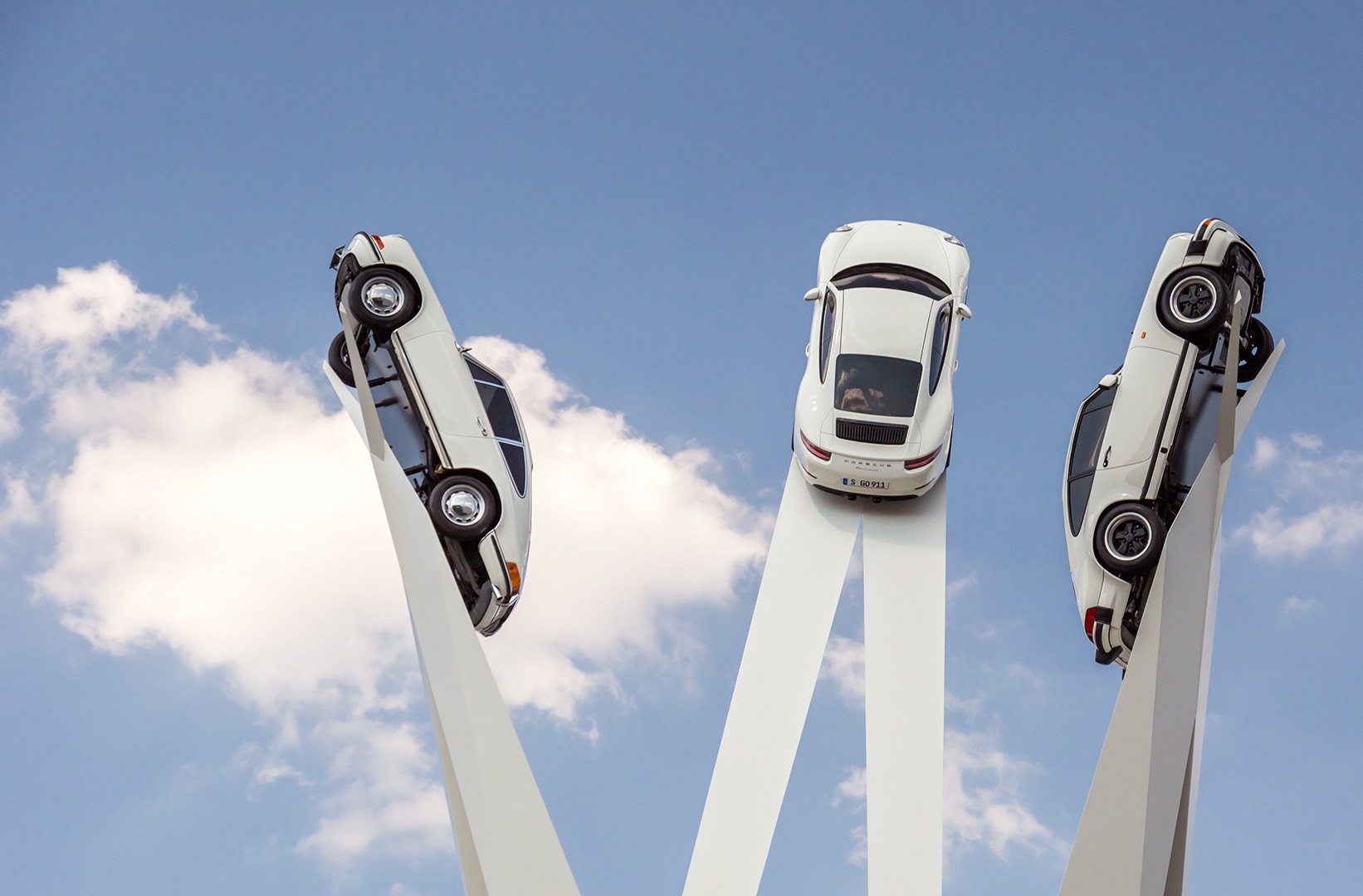 For more than a decade, British artist Gerry Judah’s amazing automotive sculptures have towered over the annual Goodwood Festival of Speed. But now one of his works has been erected on a permanent basis with “Inspiration 911” unveiled at the entrance to the Porscheplatz in front of the Porsche Museum in Zuffenhausen, a suburb of Stuttgart, Germany.

It was in Zuffenhausen that the first 911 rolled off the assembly line in 1963.

Judah’s “Inspiration 911” sculpture features 911s from three generations mounted atop pillars that reach nearly 80 feet into the German sky. The cars are from 1970, 1981and the latest-generation of the 911.

“The sculpture that we present today is more than a work of art,” Matthias Muller, chief executive of Porsche AG said during the unveiling of the sculpture. “It is also a symbol for our company’s close ties with Stuttgart.”

The sculpture was unveiled Monday evening with a show that featured vehicle choreography, a light show and film projected on the glass facade of the museum.

Judah’s grandparents were from Baghdad. His father was born in Rangoon and his mother in Calcutta, where Judah also was born before growing up in West Bengal before his family moved to London when Judah was 10 years old.

“As a boy, the dramatic landscapes of India and the ornate architecture of its temples, mosques and synagogues with their theatrical rituals had a profound effect on Judah’s developing psyche,” artist Judah’s website notes.

“These theatrical elements were to resurface in hisown later work.

“Austere London, still in its post-war drab, was a shock to the young boy, and he chose to spend as much time as possible in his bedroom conjuring up with pencils and paper imaginary landscapes, architectural fantasies and futuristic cars, leading him to want to become an artist.”

Judah worked in kitchens and as an architectural draftsman before enrolling in college to study art and design. In addition to his large sculptures, he made his name doing set designs for various opera houses, for ballet and for the Royal Shakespeare Company, as well as for the BBC and British museums.

He was commissioned by the Imperial War Museum to create a large model of the selection ramp in Auschwitz-Birkenau for the Holocaust Exhibition opened by Queen Elizabeth II. Extensive research and numerous visits to Auschwitz led him to produce work that took his art in yet another new direction — large three-dimensional paintings “exploring the devastations of war and the ravages man has made upon the environment caused by recent conflicts in Eastern Europe and the Middle East.”

Since 2005, he has done a number of such exhibitions in England, India and New York.