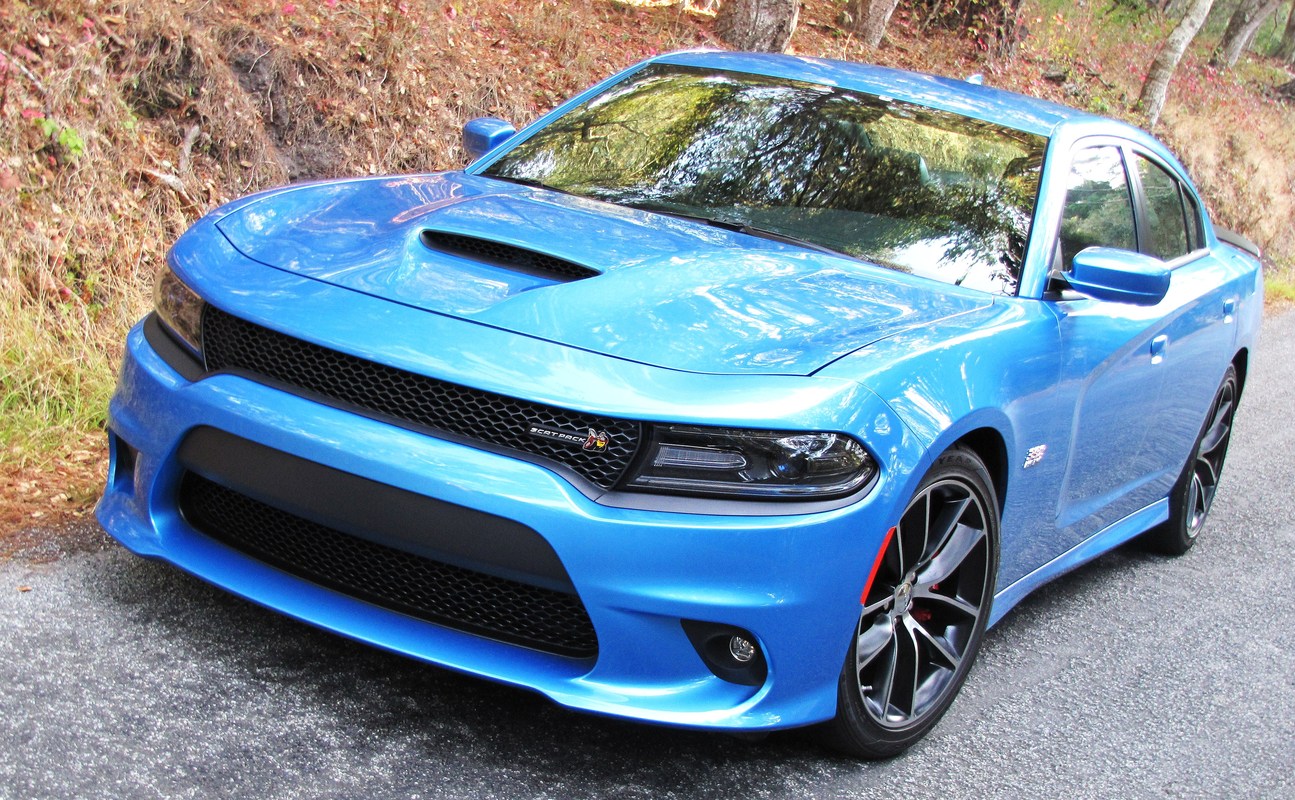 When you’re on the street during Monterey Classic Car Week – where exotic Ferraris and Lamborghinis are around every turn – you want to be driving something cool as well, something with a little dash and flash. I had the great fortune this year of scoring just such a car from the regional press fleet, a 2015 Dodge Charger R/T Scat Pack in neon blue and powered by a 392 Hemi V8.

Maybe not a pricey Italian fantasy, but the Charger is a rumbling standout of American muscle that attracted plenty of eyeball and quite a few thumbs up. I even got the high sign from a CHP officer on a motorcycle, who was perhaps getting weary of the Ferrari scene.

Good thing he spotted me idling in traffic because it’s hard to resist the powerful appeal of this very fast Charger. If he had witnessed me out on the open road engaged in high-performance hi-jinks, which I did as much as possible, the officer might not have been so friendly.

Sure, I know the muscle-car crowd is all excited about the supercharged, 707-horsepower SRT Hellcat versions of Charger and Challenger. But I’m here to tell you that the R/T Scat Pack’s 6.4-liter Hemi with 485 horsepower and a mountain of torque proves mighty satisfying when you put your right foot down, provoking an intoxicating Hemi roar and a push back in your seat.

And while the Charger might not have the Dodge Challenger’s retro appeal, it does provide a four-door alternative for the family man or woman who’s also a muscle-car fan. Yes, this car is quite practical (try explaining that to your spouse) with a broad interior and plenty of space inside for both of you and three folks in the back. Plus, a huge trunk.

The R/T Scat Pack option returned this year for the redesigned Charger, harking back to the Mopar performance package of the 1960s. But now it adds the race-honed 392 cid Hemi from the SRT model along with such goodies as multi-piston Brembo disc brakes, suspension tweaks and 20-by-9-inch alloy wheels with black-out spokes and the slimmest slivers of low-profile tires.

There’s also that little bumblebee-with-drag-slicks logo from the old days affixed to the grille, which looks memorable and groovy. But I believe the animated bumblebee in the gauge cluster that burns rubber and exits stage right every time you turn on the ignition just might get a bit tiresome after a while. The kids would probably dig it, though.

There are lots of winding two-lane roads that run through the woods around Monterey, and here the Charger proved to handle, grip and stop just as well as it accelerates. Body lean is well-controlled, and despite the big car’s nose-heavy weight it showed remarkable agility as it hunkered through the twists and turns, while the straights became rushing demonstrations of power and torque.

The eight-speed automatic transmission was a willing partner, with rapid-fire shifts whether in full automatic or manual mode. Mostly, I left it in automatic since it seemed to have an awareness of when to hold the gear on a downgrade or quickly upshift and downshift as needed. A seamless and remarkable transmission, and while the available six-speed stickshift with three pedals might be more fun, the automatic would give up nothing in terms of performance.

Another good thing about the Charger R/T, and most-likely the SRT, is how docile it is in normal driving chores, feeling about the same as any sensible family car as long as you keep your foot out of it.

There was nothing docile about the look of the Scat Pack test car, though, with its eye-catching electric-blue paint, sculpted front end, lower-body extensions and red trim, including the huge red brake calipers gleaming between the narrow silver-and-black wheel spokes. And there was that bold “392 Hemi” logo on the front fenders behind the wheel wells.

The standard Hemi V8 for the regular R/T is a milder 5.7-liter version that puts out 370 horsepower, with a 292-horsepower V6 serving as the base-Charger engine. The 6.4-liter V8 is Chrysler’s biggest and most-powerful naturally aspirated engine. The wild Hellcat engine is a supercharged 6.2-liter, but that’s something else altogether.

The R/T Scat Pack costs about $8,000 less than the essentially similar SRT if you are willing to forgo such niceties as leather seats, aluminum hood, slightly bigger brakes and wheels, and a few other items.

The Charger’s interior felt performance-oriented but businesslike, and the computer interface worked very well. Thanks to the excellent and easy-to-use GPS, I found my way around the Monterey Peninsula with no problems, even when I got deep into those back roads.

Complaints were few, mainly centering on the lower-body aerodynamic bits that caused some mild scraping on routine dips, heaves and curb cuts.  And fuel mileage was fairly paltry, most likely because I kept sampling the horsepower. According to the computer, I only got a tad over 13 mpg while the car is rated by the EPA at an average of 18.

In comparison with the high-priced Monterey car finery, the Charger R/T Scat Pack that I drove was relatively affordable at $43,280, all in, which is chump change in this neck of the woods. Not cheap, but most certainly a lot of high-performance car for the money.

The Charger R/T Scat Pack greatly enhanced my Monterey Classic Car Week experience. It was always fun to drive and a great open-highway car, effortlessly cruising along, powering through upgrades and around turns, and feeling cool with that underlying rumble that continuously reminds you that you’re in something special.

Question of the Day: What is your opinion of the Toyota MR2?