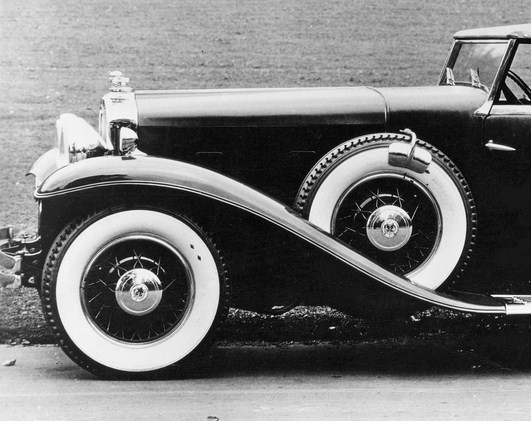 Wearing a set of Goodrich Silvertown whitewall tires – distinguished by the double diamonds on the sidewall – the shortened chassis of the 1932 Stutz Super Bearcat is clearly apparent. At only 116 inches, the wheelbase was a full foot and a half shorter than the standard offering. In comparison, today’s Ferrari FF rides on a 117.7 inch wheelbase.

The cut-down chassis and Weymann-style fabric body designed by the great Gordon Buehrig were both focused on weight reduction, but the heart of the car was the DV-32 straight-8 engine. The twin-overhead-cam, four-valves-per-cylinder engine produced 156 horsepower – a 40 percent increase over the old “vertical eight” on which it was based. Not the most powerful engine of the era, but the Super Bearcat had one of the best power-to-weight ratios of the time.

From its inception in 1911, the Stutz Motor Car Company was all about racing. Although Stutz halted factory-supported racing in 1929, Stutz cars continued to be raced by privateers. The 24 Hours of Le Mans saw numerous Stutz cars competing until 1932.

The Blackhawk version of the Stutz Vertical Eight came to dominant AAA stock-car racing, winning the championship in 1927. Stutz also competed at the 24 Hours of Le Mans with the sole Stutz losing its lead on the final lap to one of the factory-entered Bentleys in 1928, which was the best showing of any American entry until Ford’s GT40 claimed victory 38 years later. The Stutz DV-32 engine, in a different chassis, raced at Le Mans as well, achieving a fifth place finish.

Harry Stutz, founder of his namesake company, had departed in 1922. Fred Moscovics had brought a newfound success to the Stutz brand upon his arrival, but even his engineering prowess couldn’t halt the economic decline initiated by the stock market collapse of 1929. Kept alive by the personal fortune of Charles Schwab, who held controlling interest, the company soldiered on until closing its doors for good in 1934.

These cars were quite expensive at the height of the Depression and only about 20 are thought to have been made; fewer than a dozen are thought to survive. The last Super Bearcat to come to auction was sold by Bonhams at Amelia Island earlier this year for $1,012,000.