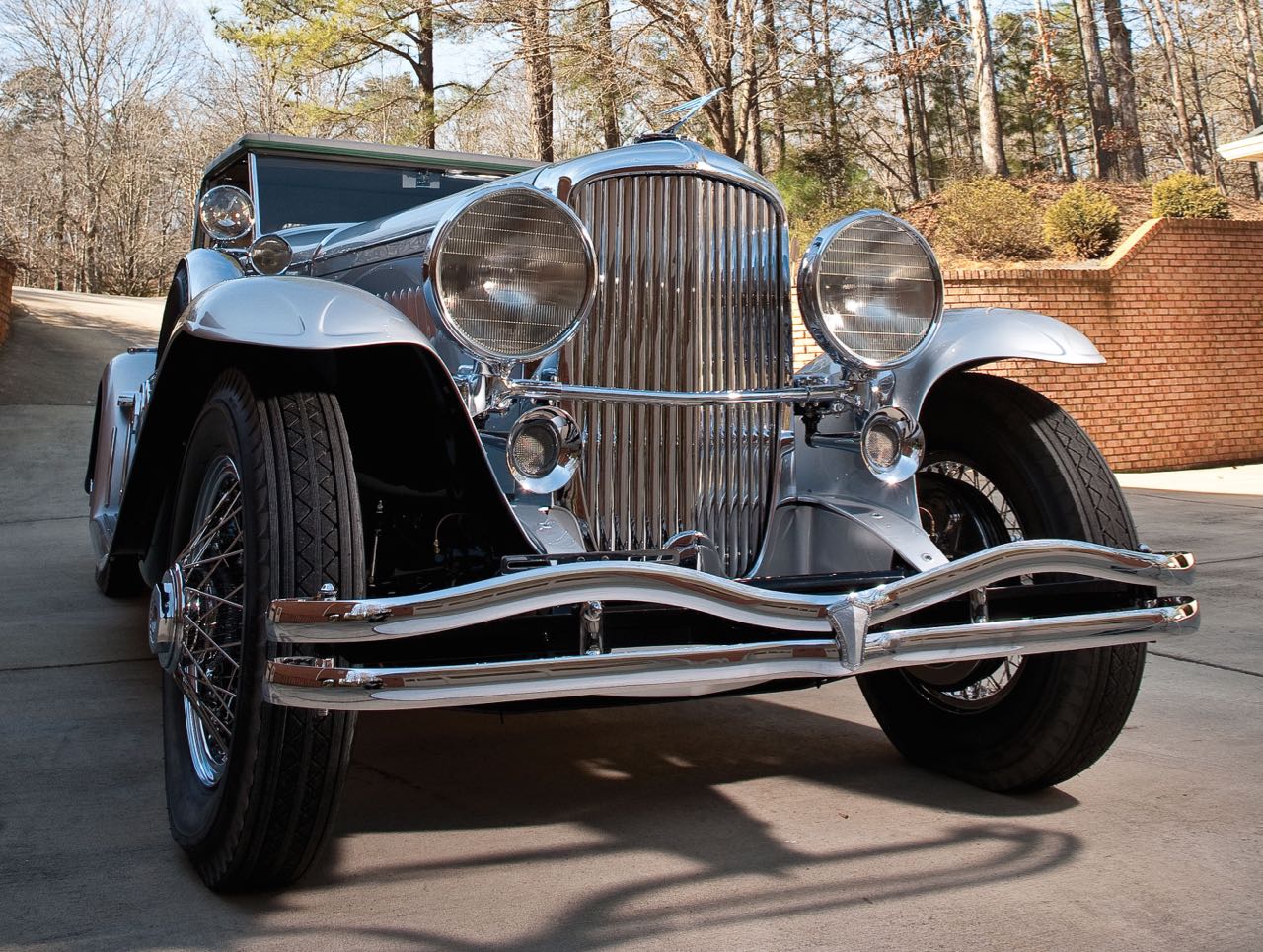 Yes, it only makes sense to offer a sensational 1929 Duesenberg Model J for sale at an auction held during the annual Auburn Cord Duesenberg Festival in Auburn, Indiana. And this one is, indeed, sensational — a Murphy-bodied convertible coupe in a silver finish that makes the car appear to be glowing.

But while it was the photographs that caught my eye as I paged through the Auctions America Auburn Fall sale catalog, it was the words that really got my attention, especially when I read, “It is hard to imagine the effect that chassis no. 2168 must have had on its next owner, William Veeck Junior…”

Wait, Bill Veeck, as in Veeck As in Wreck, as in former owner of the Chicago White Sox, as in one of my childhood (and still) sports heroes used to own this very car?

What’s that? This car’s story also includes a chapter involving the son of P.K. Wrigley, long-time owner of my beloved Chicago Cubs?

“From the car side, it’s a Model J Duesenberg, which is probably the greatest American car ever produced. The saying, ‘It’s a Duesie,’ comes from the Model J.”

Gould rattled off a virtual all-star team of 1920s and ’30s American cars — Marmon 16-cylinder, Cadillac 16-cylinder, Stutz DB32 — “but none of them could equal the mighty Model J, which he agreed was the “gold standard” among American cars, much as the Mercedes-Benz 300SL “Gullwing” is the gold standard among collectible European cars.

Only 481 Model J Duesenbergs were produced.

“A few years ago, they were coming up for sale on a regular basis,” Gould said, noting that Texas-based collector John O’Quinn had 28 of them in his collection when he died.

“Those all got sold in a two-and-a-half-year period,” Gould said, “and there are very few Duesenbergs that have been offered in the last few years, and their prices have escalated.”

The car being offered at the Auburn sale has a pre-auction estimated value of $1.5 to $1.75 million.

With such a value, you might wonder why the car wasn’t offered at the recent Monterey sale staged by Auctions America’s parent, RM Sotheby’s.

“It could have been at Monterey and that’s where my consigner wanted to sell the car,” Gould said. “I talked him out of it. We wanted to bring the Duesenberg back to its roots, to where the car auctions all started and where it would be the star of the show in conjunction with the ACD Festival. They expect 15 Model Js at the Festival this year, and this will be the best Duesenberg that will be auctioned off during the weekend.”

“It has Murphy coachwork which is the most desirable body style produced for a Model J chassis,” Gould added. “When you bought a Duesenberg you just bought the chassis and took the chassis to a coachbuilder to have a body produced. Murphy was in Pasadena, California, and they had some of the most beautiful designs ever created for the Model J chassis.”

The car at Auburn is on a short-wheelbase chassis and is powered by Duesenberg’s 420 cid straight-8 engine. After restoration by Al Prueitt & Sons, it was on the 18th fairway at Pebble Beach in 2009 and won an award at Amelia Island in 2011.

But it’s the owners before those that piqued my interest in the car.

“This car is deeply rooted in Chicago,” Gould said. “It spent much of the early part of its life there. It has been owned by probably two of the most famous people who ever lived in Chicago, well, maybe with the exception of Al Capone.”

According to Auctions America’s research, Duesenberg chassis No. 2168 first carried a LeBaron Phaeton “Sweep Panel” body and was purchased July 9, 1929, by H. Leslie Atlass, whose older brother, Ralph L., owned the Mallory Battery Company. The brothers founded a Chicago radio station WBBM (World’s Best Battery Maker) and made a lot of money selling 67 percent interest in the station to CBS.

Leslie was retained as the station’s general manager, working out of an office in the magnificent Wrigley Building on the Chicago River. Also working in the building was William Wrigley Jr., whose father, P.K., not only owned the chewing-gum company that bore the family name but the Chicago Cubs baseball team. Wrigley also owned a Model J and convinced Atlass to swap the coachwork on their respective cars.

“People have queried why they didn’t merely trade cars,” the Auctions America text reports. “It can be speculated that the personal ‘feel’ and minor performance variances may explain the body swap transaction.”

Whatever the reason for the swap, WBBM was broadcasting Cubs baseball games and Atlass was a frequent visitor to Wrigley Field, where Veeck Jr. worked selling hot dogs and peanuts, a job he no doubt secured because his father, Bill Sr., had become the team’s president. (Young Veeck was 13 years old when he suggested planting ivy along the walls of Wrigley Field.)

After his father died, Veeck Jr. became the Cubs treasurer. In 1940, Veeck Jr. traded a Mercury Town Sedan and cash for Atlass’ Duesenberg, but less than two years later, he sold the car so he could buy half-interest in the Milwaukee Brewers, a minor league team.

Veeck lost a leg during World War II and afterward went through a series of wooden replacements, a succession in part because he’d hollow out a spot on them to use as an ashtray.

Just before the war, Veeck had tried to buy the faltering Philadelphia Phillies; his plan to replace the team’s white players with those from the Negro League (Veeck had been the Midwest promoter for the Harlem Globetrotters basketball team), but professional baseball’s National League wasn’t ready to break the sport’s color barrier and didn’t let the deal go through.

In 1946, Veeck did buy the Cleveland Indians and signed Larry Doby as the first black player in the American League.

A maverick among baseball team owners, he later owned the St. Louis Browns (once sending 3-foot, 7-inch Eddie Gaedel to the plate to draw a walk while wearing uniform number 1/8) and in 1959 bought the Chicago White Sox, who immediately won the American League pennant.