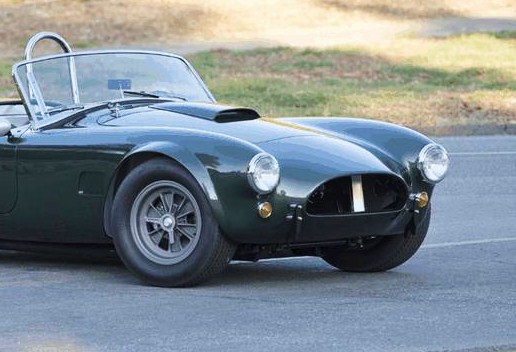 Only four Shelby Cobra 289 Dragonsnakes were ever built, destined for drag strips where they showed the same winning ways in a straight line that they had already shown on twisting road courses.

Cobra number CSX2472 was one of them, originally planned as a Shelby race team car but instead built to the unique specifications of a private owner in 1965. The fire-breathing Dragonsnake is indeed a rare high-performance Cobra and it goes to auction September 5 during Worldwide Auctioneers’ eighth annual sale at the Auburn-Cord-Duesenberg Automobile Museum complex in Auburn, Indiana.

Powered by a 300-horsepower 289 cid race-prepped Ford V8, the Dragonsnake is described by Worldwide as being in largely original condition with low mileage and an impressive competition history. The Cobra spent much of its active life being driven on the street as well as on race tracks.

“Not only has the car remained very original throughout its life, retaining all of its original undamaged body panels and frame, it carries a successful and storied racing history, hoarding some 1,200 trophies while campaigned,” Worldwide says in the car’s catalog description. “It has a seldom-seen, unbroken chain of ownership with only four owners from new. One such owner loved the car so much he owned it twice, for substantial periods of time.”

The current owner had the Cobra extensively restored, the auction house says, and it remains in immaculate condition. The AC Ace-based car is highly documented going all the way back to its creation at Carroll Shelby’s factory in Venice, California, and delivery to Pittsburgh car dealer and Le Mans champion Ed Hugus, who completed the Dragonsnake to his customer’s specifications.

The Cobra was purchased from Hugus by Russ Freed of Pittsburgh, who used it as a road car until he sold it in 1967 with 5,200 miles to J.J. Rodman of Glenshaw, Pennsylvania, “who with the help of his sister Elaine drove it some 10,000 miles and reportedly raced it extensively and successfully in autocrosses and hill climbs, which Rodman said netted the pair hundreds of trophies that to this day fill a room in Rodman’s house,” the catalog description says.

The now-restored car has a replacement 289 built for road racing, but the original engine block would accompany the Cobra once it is sold, Worldwide said. Just 19,000 miles now show on the odometer.

No value estimate is given for the Dragonsnake, although early original Cobras commonly climb past seven figures at auction. With its history, rarity, condition and documentation, this one should soar.

“Very, very few cars like this remain today and the best ones, like this one, seldom change hands,” Worldwide said.