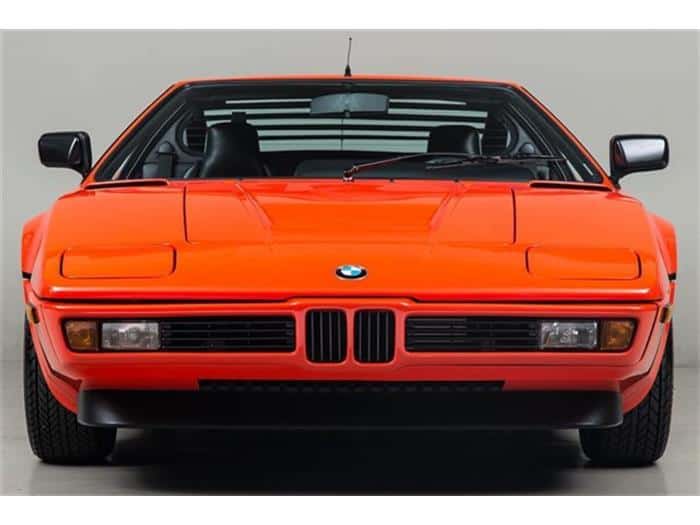 Hand-built between 1978 and 1981 as a homologation special for sports-car racing is the iconic, mid-engine BMW M1, considered to be the one and only exotic supercar ever built by the Bavarian automaker. The E26 M1 is among the rarest BMW models built with a total of 453 produced. Of those, 399 were designed for street use and the rest were built for the sole purpose of racing.

So why is this 1980 BMW M1 wedge car our Pick of the Day? Oozing performance and style, the BMW M1 was one of the fastest and most-dynamic cars on the market during its day, and it launched the BMW M Motorsports division.

The E26 M1 project was approved by BMW AG in 1976 under management’s condition that it would not interfere with the production of any other BMW model, and it would show that BMW was a legitimate manufacturer of sports cars that could compete with Porsche and Ferrari on the street. As an added bonus, BMW wanted to offer a purpose-built machine that could participate competitively in the Group 4 and Group 5 racing series. Thus, the birth of the BMW M Motorsports division and M series.

Production examples of the M1 were partially assembled at Lamborghini using fiberglass bodywork supplied by T.I.R and styled by Giorgetto Giugiaro featuring a design that blended both Teutonic and Italian machismo.  Tubular space frames supplied by Marchesi were used. Final assembly was conducted at the Baur coachworks in Stuttgart, Germany. Each M1 was then given a final inspection at the BMW Motorsport facility in Munich before being delivered.

The M1 housed a 3.5 liter four valve, twin-cam inline six that pushed out an estimated 277 horsepower and 239 pound-feet of torque.

This particular E26 M1 listed on ClassicCars.com has 8,441 original miles. The M1 is unrestored, original and immaculate, the seller says, and comes with its original tools, manuals, spare tire and jack.  According to the seller, this E26 was imported into the U.S. on March 27, 1980, after which it passed DOT compliance testing in Los Angeles.

The first owner of the car owned the car until 1986 when it was purchased with only 8,778 km (5,454 miles) on the odometer, the seller says in the listing. The second owner, a car aficionado and collector, used the car sparingly for the next 10 years.

In 1996, the car moved on to a new owner with 12,162 km (7,557 miles) on the odometer, the ad says. Knowing the collectable value of his M1, the third owner put the car in storage, only taking it out to have it inspected and emissions tested.

According to the seller, the result of this careful preservation was that in 2012, this E26 had only 12,237 km (7,604 miles) and was still in immaculate condition. The M1 has spent the past three years in the private collection of a BMW dealer in Albuquerque, New Mexico, and has covered only 800 miles since 2012.

The Scotts Valley, California, classic car dealer advertising the M1 asks that perspective buyers contact the dealership for pricing information.  According to Hagerty’s price guide, the top value of a 1980 BMW M1 is $521,000.