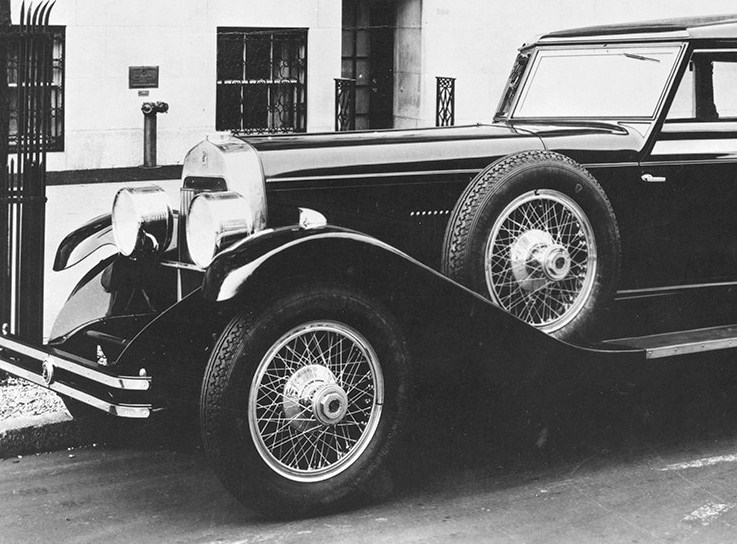 As you’ve probably guessed, I enjoy searching for old photos of early cars. During Monterey Classic Car Week, this means a stop at Automobilia Monterey, and it was there that I found this image of a uniquely bodied duPont Series G Special Sport Sedan.

Honestly, every duPonts is unique as only an estimated 600 total cars were produced by the duPont Motor Company in the 13 years they were in business. E. Paul duPont founded the company to produce marine engines for the Allied war effort in World War I.  They introduced their first automobiles at the 1919 International Salon held at the Commodore Hotel in New York City.

The series G was introduced in 1929, with a 125-horsepower straight-eight engine. These luxury cars were bodied by some of the best firms of the day, with Merrimac being the largest supplier, said to have built more than 120 of the bodies.  The Merrimac Body Company, a spinoff of parent company J.B. Judkins, was named for its location: Merrimac, Massachusetts.

Merrimac got its start in 1920 when Judkins couldn’t handle a series of production-body orders from Mercer. The Mercer deal fell through when Mercer filed for bankruptcy, but the Merrimac company survived to serve duPont, Franklin, Locomobile and most notably, Rolls-Royce of America.

This car wears a Merrimac body described by duPont as a Special Sport Sedan. The body style was advertised in the day by duPont, but I would guess that few were built and this is where our story takes a wild turn.

It just so happens that this year, the Pebble Beach Concours was hosting a featured class of duPonts, and as I strolled though the cars lining up for the Tour d’Elegance on Thursday, I spotted this car in the old photo. Not one like it, but this very car! How cool is that? Apparently, Merrimac only built one Special Sport Sedan and it’s currently owned by a member of the duPont family.

At the time this picture was taken, duPont had four dealer showrooms across the country: New York, Philadelphia, Baltimore and Los Angeles. The car is seen in front of 1 Sutton Place in Manhattan, an upscale apartment building completed in 1927 on the banks of the East River in midtown.

E. Paul duPont became president of Indian Motorcycles in 1930, saving Indian from impending financial ruin. The Du Pont Motor Company ceased building cars in 1932 due to the Depression and was merged with the Indian Company.