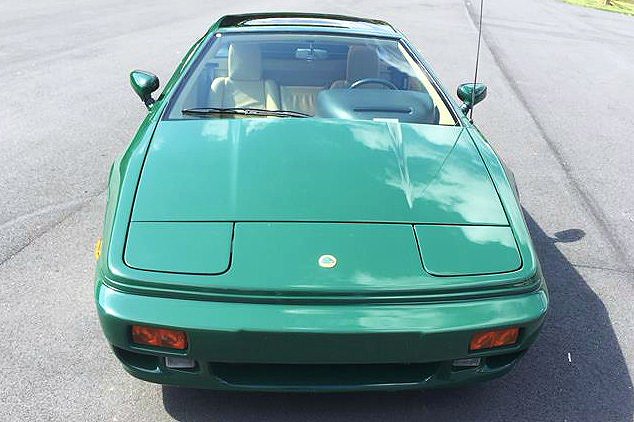 The .prices for exotic cars from the 1980’s and 1990’s have gone ballistic in the past year, but there is still a European car out there that can be had for used Camry money, and that is the Lotus Esprit Turbo

Our Pick of the Day is one of the later redesigned models, a 1991 Lotus Esprit Turbo in the nice color combination of British Racing Green over tan, which in my opinion is one of the nicest combinations offered on the Esprit.

According to the seller’s listing on ClassicCars.com, this Esprit has only 52,995 miles and has been garaged as part of a collection most of its life. The pictures tell the story of a well-cared-for example.

The Esprit started out as what was probably the best manifestation of the wedge design for cars. The original model was styled by the great auto designer Giorgetto Giugiaro and took the world by storm when it was introduced at the Turin Auto Show in 1972.

Over the years of its run, the car was given a turbocharger and spoilers, and it was eventually redesigned for a more modern worldly look by the Peter Stevens, the man behind the design of the legendary McLaren F1. Stevens did a great job updating the car, creating another look and in the process a car that was much easier to live with. This car is one of the Stevens-designed cars.

Other upgrades for this redesign was an improved gearbox, a much more ergonomically friendly, luxurious and comfortable interior, and a vastly improved electrical system.

Earlier Esprits have the reputation of being a bit of a nightmare to maintain and helped earn Lotus the nickname of Lots Of Trouble Usually Serious. But these later, redesigned cars are generally considered to be well-built and well-engineered cars with almost all of the old bug fixes attended to.

For whatever reason, the Esprit is yet to climb drastically in value compared to its contemporaries, such as the Ferrari 308/328 or the Lamborghini Diablo.

The Esprit is a fast car to be sure, with 0-60 times in the range of 6 seconds and a top speed in excess of 150 mph. Add to that handling that a 308 owner can only dream about and service costs that of a fraction of the Ferrari and we think that the Esprit deserves its time in the spotlight. I would not be surprised if people to woke up to that soon.

With a market-correct asking price of only $21,900 we feel that this car offers more car for less money than any other exotic car that we can think of.