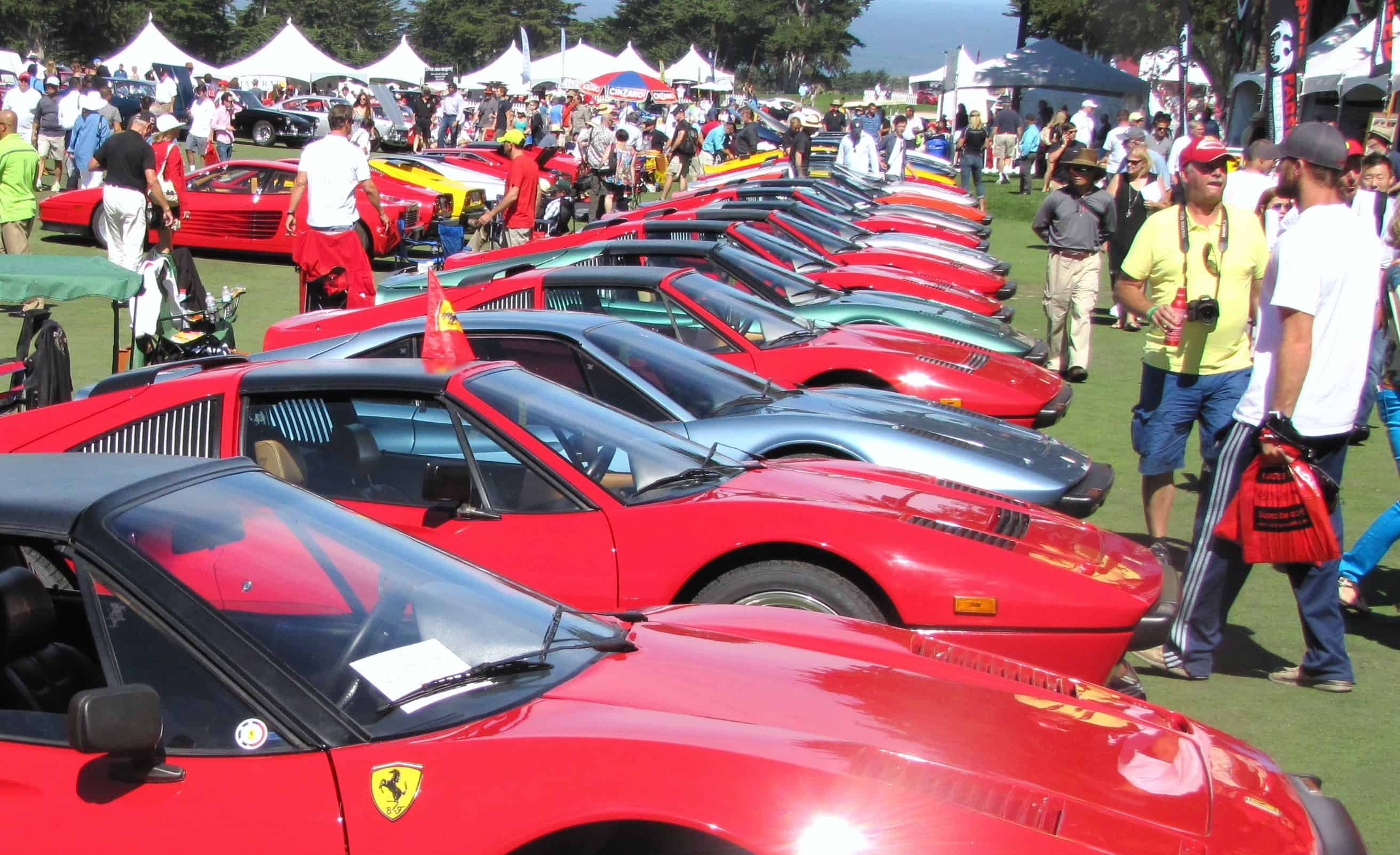 So many events, so little time. That could be the marketing slogan for Monterey Classic Car Week, when a seemingly countless number of car shows, concours, exhibits, rallies, parties, dinners and, of course, auctions crowd the days leading up to the vaunted Pebble Beach Concours d’Elegance on Sunday.

After which, everybody goes home. No wait, there’s still the second evening of the Gooding auction.

So one must choose from the smorgasbord of automotive happenings, which are mainly focused on great cars of the past. For me, it was attending a number of the key auto shows and concours events (being assigned to cover those events for Classic Car News by organizer-in-chief Larry Edsall helped me focus).

First up on Tuesday was the relaxed Carmel-By-The-Sea Concours on the Avenue that serves as the opening shot for Classic Car Week. Eighteen tree-lined blocks of the prosperous coastal town are closed off to all but the 175 or so enjoyable show cars, and to the thousands of people who flock into the picturesque setting to view them, for free.

If I were forced to choose the best Monterey event, the Carmel concours would be a strong contender. Such a great and egalitarian selection of cool cars, from gleaming restored pre-war classics and high-strung European sports cars, to Ford Mustangs, Corvettes, muscle cars, Volkswagens and a distressed Land Rover 80 that looked like it had been through the Boer War.

It was here that I shot my favorite photo of the week, an impromptu thumbs up from a concours judge who edged into the frame as I shot a hunkered-down 1950 Mercury lead-sled custom. A fantastic photo bomb.

A couple of days later, the same main street of Carmel hosted another old-car gathering, also free but considerably more crowded with spectators. This was the lunch stop for the Pebble Beach Tour d’Elegance in which most of the impressive and highly valuable vintage cars that would appear in Sunday’s concours are parked on the closed-off street while the drivers and passengers take a break to eat.

And instead of paying $300-$350 to view the cars on the 18th Fairway at Pebble Beach, the Carmel event is absolutely free. If you don’t mind the dense, milling swarms of people. And if you can find a place to park on the narrow nearby streets.

The Tour itself is a remarkable event that puts the precious vehicles on an 80-mile driving tour, including parts of the famed 17-Mile Drive and scenic Highway 1 along the coast. Concours participants get the opportunity to drive their wonderful machines on beautiful highways, and onlookers can get a glimpse of the cars – roaring sports cars, gliding big classics and chuffing antiques – out on the open road instead of on static display.

But in Carmel, you could get right up close to the cars, sometimes too close as folks edged past. If I were an owner of a righteous classic car admitted to Pebble, I would be mighty nervous about the mass of humanity pressing up against it. Last year, I met up with an acquaintance on the tour and he was so anxious about his exotic European sports car that he never did go for lunch, instead standing guard and shooing those who got too close.

The tour lunch stop, however,  is just the kind of crowd-pleasing occurrence that makes Monterey week so special. All week, fantasy cars are just about everywhere you look. One morning, there was an ultra-exotic McLaren in the small parking lot of our humble motel. I encountered a new Porsche 918 parked all alone out in some woods. And how often do you see a prized Duesenberg rumbling down a public road? Or a Bugatti Veyron?

Friday was for me German car day as I attended first the Legends of the Autobahn show of BMW, Mercedes-Benz, Audi and others, and then the Porsche Werks Reunion of around 800 of the innovative sports cars, most with engines in their backsides. Both of these events were also free, though you had to pay $10 to get into the Porsche show parking lot – many people parked on the nearby road.

BMW was the undisputed champion of Legends, probably because this started off as a BMW event and is still led by members of that club. Now in its seventh year, Legends brought out a strong selection of cars, old and new, in the lovely setting of the Nicklaus Club-Monterey golf club and historic lodge.

Being a solid Porsche enthusiast ever since I obtained my little 356 Super coupe, I was highly impressed by the sweeping array of cars at the Werks Reunion, the largest contingent being the ever-popular and long-lived 911 from the earliest cars to the latest. The 40th anniversary of the 911 Turbo was celebrated, and there were powerful examples on the lawn.

From what I heard, the Reunion was supposed to have a maximum of 500 cars on the Rancho Canada Golf Club in Carmel Valley but ended up with more than 800 (psst… don’t tell the fire marshal). The 911 horde swept over the grassy hills and off into the distance.

Apparently, folks were told that all Porsches were welcome for the event, and we were treated to the spectacle of a number of modern Cayenne SUVs parked out there. I thought that was just foolishness.

Up until last year when the Werks Reunion started, Porsches were part of Legends, but the Porsche clubs split to hold their own car show. At either event, the roads and parking lots surrounding the shows were sprinkled with many interesting German craft.

Concorso Italiano is one of the mainstay events of Classic Car Week, with Ferraris being by far the biggest presence, as they are on the streets of Monterey. It costs $75 to enter, but this is truly a terrific display of Italian cars and culture that is duplicated nowhere else in the U.S. Vintage Ferraris were featured, as well as 25 years of the Lamborghini Diablo and 50 years of the Iso Grifo, many of them powered by Corvette engines.

As well as the Ferraris, there were Maseratis, Lancis, Fiats, De Tomasos and Alfa Romeos among the 850 cars parked on the rolling fairways of Black Horse Golf Course in Seaside. I love seeing the old Alfas and Lancias, which to me best exemplify the spirit of non-exotic Italian motoring.

And lest I forget another marvelous show that I attended, the Little Car Show in scenic Pacific Grove was once again wonderfully quirky. This is a show specifically for the least (at least in size) of the Monterey vintage cars, which have engine displacement of 1,600 cc or less and are at least 40 years old.

BMW Isettas, Minis, Fiat 500s, Crosleys, Morris Minors, MGs, Triumphs, VW beetles and many others – including a miniscule Peel Trident with a 50 cc engine that the owner was able to lift on one side – were part of the more than 100 cars shown in the family-friendly atmosphere. The kids seemed particularly tickled by the little cars, some of which looked like toys that they could drive around.

And I think that’s about it, not including the spectacular wonderfulness of the 65th annual Pebble Beach Concours that I also attended. No auctions or vintage racing, but I still feel that I enjoyed a lion’s share of the real richness of the greatest week of classic car motoring.